Okay, my first fairytale month book was not great. That doesn’t mean anything, right? There’s plenty more out there and while the McKinley hype didn’t convince me personally, I’m not giving up on fairy tale retellings (or McKinley, for that matter) just yet. 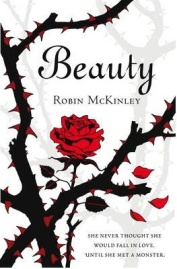 first sentence: I was the youngest of three daughters.

The author loses herself in descriptions of the castle, the gardens, the forks on the table, literally every single detail. There are authors who can pull that off – Tolkien’s descriptions of landscapes never really bothered me – but here, where the plot is nothing new, I felt the author should at least bring something new to the table. And she simply didn’t.

Reading Beauty felt a lot like watching a boring version of the Disney movie (granted, the book was published first) without singing or fun or a good love story. If you tackle a well-known fairy tale, the only way to make it interesting to readers is to give them something they don’t expect. Here, everything is as expected. The only parts that were slightly more interesting to me, were Beauty’s sisters stories. I actually hoped Grace would end up happily ever after.

The characters are practically cardboard. But that is also not surprising. Most fairy tales don’t have a lot of character variety, after all. But at least the Beast should have shown more temper, not been so damn nice all the time, and maybe talked more to his “guest”. The few conversations they do have don’t really teach us anything new about either character. It is usually just the Beast proposing and Beauty refusing him. Wearing pretty dresses, riding her horse and walking around the castle, reading books, does not make for a page turner.

I liked the introduction well enough, the writing style is enchanting, the idea of Beauty actually being very plain ingtriguing. It takes very long until the Beast appears, though and then, McKinley does nothing but describe interior decoration to us. Beauty wanders through the endless corridors of the Beast’s castle and looks at each candlestick in minute detail – which makes up pretty much the complete middle third of the book. The few glimpses of plot in between did not keep me intersted.

I was ready to drop the book and start my luck with something else, when Grace’s story became more important again. As I said, I cared about Beauty’s sisters (perfect as they are) and wanted to see them happy. So I raced through the last third of this novel to get my happy ending. The breaking of the curse and the Beast’s transformation are done so quickly that there was no way for me to build up any emotion. I did come to care for the characters, in the end, but not enough to want more by McKinley.

This reminded me a lot of the Walt Disney version of Beauty and the Beast. Magical, invisible servants, blankets that tuck you in themselves, doors that open as if by magic… and a protagonist who loves books. I’m assuming Disney was borrowing heavily from McKinley’s reimagined fairy tale. Unfortunately for me, this made the story not only 100% predictable, it also made it look bad. Because, let’s be honest, Disney did a much better job. And offered a bunch of sing-along music that I still love.

THE GOOD: Appropriate, magical writing style, characters often stand for one particular quality – very reminiscent of old fairy tales.
THE BAD: Very, very boring at times. How a child is going to push through this, I don’t know. I was tempted to lem the book. Ending feels rushed.
THE VERDICT: A story that very likely inspired Walt Disney’s Beauty and the Beast – Disney did it much better, however, and I recommend the movie over this book any time.