Only recently turned into a true Pratchett fan, I couldn’t keep my fingers off this newest of his books. It’s the second collaborative work of Pratchett’s that I ‘veread. While I enjoyed Good Omens (written with Neil Gaiman), I found that I could pick apart the ideas that stemmed from each of the writers and I preferred Gaiman’s writing to Pratchett’s humor. In The Long Earth, I couldn’t tell at all. The book feels more uniform in its style, but also more scattered in its plotlines… 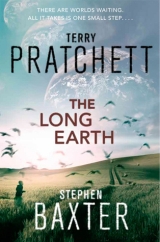 THE LONG EARTH
by Terry Pratchett and Stephen Baxter

first sentence: In a forest glade: Private Percy woke up to birdsong.

1916: The Western Front. Private Percy Blakeney wakes up. He is lying on fresh spring grass. He can hear birdsong and the wind in the leaves. Where have the mud, blood, and blasted landscape of no-man’s-land gone? For that matter, where has Percy gone?
2015: Madison, Wisconsin. Police officer Monica Jansson is exploring the burned-out home of a reclusive—some say mad, others allege dangerous—scientist who seems to have vanished. Sifting through the wreckage, Jansson find a curious gadget: a box containing some rudimentary wiring, a three-way switch, and . . . a potato. It is the prototype of an invention that will change the way humankind views the world forever. The first novel in an exciting new collaboration between Discworld creator Terry Pratchett and the acclaimed SF writer Stephen Baxter, The Long Earth transports readers to the ends of the earth—and far beyond. All it takes is a single step. . . .

What a hugely interesting premise. Humankind can “step” from one world to a parallel world next door. This opens an infinity of worlds and possibilities to Datum Earth’s population. People seek a way out, it’s the Wild West all over again. Except you can step west or east and you can go as far as you like. Each parallel Earth is a little different than our Datum Earth, there are creatures and plants similar but not quite like ours – and only our Earth has humans.

Pratchett and Baxter start out well enough and had me intrigued from the very beginning. They quickly lose themselves in countless mini-chapters, explaining the Long Earth from different characters’ points of view. Most of these characters never show up again and merely serve to show different aspects of the same thing. That is fine. For a while. Our protagonist Joshua, who I was most interested in (as I was supposed to be, I’m sure) has to wait a long time to get any real screen time.

This posed severe problems for the pacing of the novel. The plot only really gets driven forward by Joshua and Lobsang, the awesome human/AI, and at the point when we follow those two on their exploration of the Long Earth, the authors seemed to have run out of ideas. Sure, we do meet interesting creatures eventually and even other humans who have ventured far out into the Long Earth. But the real big surprise comes up about 85% into the book and we never get to discover that one properly. The ending is as abrupt as it is anti-climactic. And I didn’t appreciate the cliffhanger at all. As the blurb says, this is the first in these authors’ collaboration, so I’m assuming we’ll get a second volume soon.

What bothered me was that descriptions of the millions (literally!) of Earths took overhand. I loved the introduction of the characters and immediately fell in love with Lobsang, whom we first meet as a soda machine. However, later when characters are sparse and there would have been room and opportunity to delve deeper into their pasts and motivations, we skim on the surface and get a few funny conversations out of it. That’s all. For a writer like Pratchett, who can create a vivid, three-dimensional character with just a few lines, I was surprised at how superficial Joshua was left in the end.

To mention the great bits: The style was fantastic. This book almost reads itself. Short chapters, but not too short, concise language and appropriate expressions for Lobsang made it a very quick and easy read. Even when the lack of plot should have bored me to death, the style kept me going because it was just so smooth. Is that enough for a great book? Well, no. But it’s better than a badly written book. I wouldn’t want to read a second volume right away but when it does come out, I’ll give the Long Earth another shot. And who knows, maybe next time the editor will dare give such famous authors a few tips on how to write a better book. The ideas, especially the big revelation in the end, are brilliant and I would have loved to see more of that.

THE GOOD: What an idea! The possibilites are endless and political and economical points are well made.
THE BAD: Interesting points are left sadly unexplored, the pacing is off, characters could have used more developing.
THE VERDICT: Great potential that was mostly left unused. I have high hopes for a second volume, though. Quick read.

RATING: 6/10  Good book with quite some room for improvement

3 thoughts on “Terry Pratchett and Stephen Baxter – The Long Earth”