Gollancz published their catalogues for January – July 2013 (here) which also made me look through the catalogue for July 2012 – October 2013. And then some other publisher’s catalogues. And boy, oh boy. I know where my Christmas money is going this year…

ALAN BRADLEY – SPEAKING FROM AMONG THE BONES

I’ve only read the first two Flavia de Luce mysteries (The Sweetness at the Bottom of the Pie and The Weed that Strings the Hangman’s Bag) but I am infatuated with Alan Bradley’s voice and look forward to more precocious 12-year-old mystery-solving, pigtailed girls. 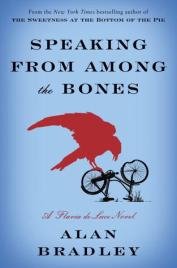 The fifth book in the series starring eleven-year-old detective Flavia de Luce.
Flavia is  first at the scene when the tomb of St. Tancred is to be opened. But the body she finds is not that of the desiccated saint, but Mr. Collicutt, the church organist. Intrigued by the circumstances of his death, Flavia finds herself exploring a secret maze of underground passages beneath the church – and is drawn into the dark world of one of Bishop’s Lacey’s most peculiar families.

These books have been out for a long time and I’ve had my eye on them for years. But these new covers really appeal to me in their simplicity.

SCOTT LYNCH – THE REPUBLIC OF THIEVES

Fingers crossed so hard! I am currently reading the second book in the Gentleman Bastard series and I honestly cannot get enough of Scott Lynch. His books are sheer perfection. Also, I think the cover is very well done. 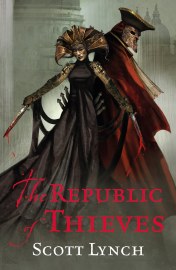 The return of tone of the most exciting new commercial writers of the 21st century.
After their adventures on the high seas, Locke and Jean are brought back to earth with a thump. Both men find themselves pitted against Locke’s long-lost love, Sabetha. And Sabetha has just one goal – to destroy Locke for ever.
The Gentleman Bastard sequence has become a literary sensation in fantasy circles.

Another one of those series that I haven’t even started yet but am strangely excited about. I have heard nothing but good things about the Twilight Reign series and I can’t wait to get started. And the covers look stunning next to each other. 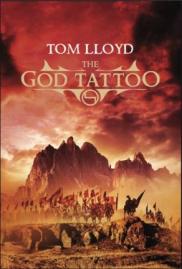 olour and shape to the epic story of the Twilight Reign series – this is an essential volume for Tom Lloyd’s many fans. The history of the Land may remember the slaughter at Moorview or the horror of Scree’s fall, but there were other casualties of the secret war against Azaer – more tales surrounding those bloody years that went unrecorded. In the shadow of memorials to the glorious dead, these ghosts lie quiet and forgotten by all but a few.
A companion collection to the Twilight Reign quintet, these 11 stories shine a rather different light on the Land. Look past the armies and politics of the Seven Tribes and you will find smaller moments that shaped the course of history in their own way. But even forgotten secrets can kill. Even shadows can have claws.