I have been following Fitz and the Fool for many years now and Robin Hobb has become one of my favorite writers ever. It is few others who managed to evoke an emotional response of that magnitude by creating amazing characters and putting them through hell. Robin Hobb does it best. And while I always need breaks after finishing one of her trilogies, I feel drawn back into the world of the Six Duchies and that royal bastard I have grown to love so much.

THE GOLDEN FOOL
by Robin Hobb

*MASSIVE SPOILERS FOR THE FARSEER TRILOGY AND FOOL’S ERRAND AHEAD*
I actually didn’t post the first sentence because it contains a huge spoiler for the entire series.

Fitz has succeeded in rescuing Prince Dutiful from the clutches of the Piebald rebels, and has returned with him to Buckkeep castle. With Dutiful safe again, Queen Kettricken can proceed with plans to marry him to the Outislander princess, Elliania. However, with tensions building among the peoples of the Six Duchies over Kettricken’s tolerance of the Wittted, even Buckkeep is no longer safe. A reluctant Fitz is assigned to protect the young prince, and also train him in the Skill, and in doing so he finally makes contact not only with his estranged daughter, Nettle, but with someone in Buckkeep who may possess a greater Skill talent even than Fitz. And who may represent a terrible threat to the Farseers. Meanwhile, Elliania arrives and, before she will accept Prince Dutiful’s betrothal, challenges him to undertake an impossible quest. He must kill a legendary Outislander dragon. 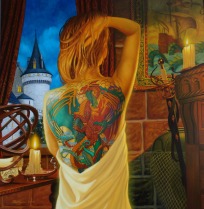 Robin Hobb’s books start out slowly. In light of the events of Fool’s Errand, I knew this was going to be no exception. Fitz has a great deal of drama to get over and it wasn’t until a third into the book that I felt the plot actually dragged. I saw the threads the author was holding in her hands and there is a lot of setting up later events in this middle volume. However, with the first two trilogies in the Six Duchies universe, I always liked the middle volume best. Not so here.

As plot goes, I’d say that more than half of this book could easily have been cut without the readers missing any essential information. But that is another thing about Robin Hobb – she writes carefully and she explores her character’s emotions and actions to the core. If you don’t enjoy things like that, then this is not a book for you. But if you don’t mind slow passages – sometimes very long slow passages – that favor character development over action, and if you enjoy beautifully wordy prose, Robin Hobb is your girl!

No other author – except maybe Cat Valenet – teaches me so many new words and the use of words (to me, English is a foreign language of course, so most of you may not be as impressed with her writing) as Robin Hobb. When I read her books, I feel like this is a woman who not only goes into the deepest depths of her characters’ lives but who also has a very, very firm grasp on the English language. It is a pleasure to read and another reason I don’t mind long-winded descriptions of inner turmoil and contemplation.

Despite all of that good stuff, this book simply lacked an ending. Now that I’m finished, I feel like it exists solely to set up the events that are going to happen in the final instalment. Sure, Hobb makes us extremely curious (and worry about certain characters) but does that justify an entire book? Political intrigue, injuries, family drama, and true friendship feature in The Golden Fool but the usual culmination of all those events at the end of the novel was simply missing here.

There’s little I can say without spoiling things for you so I’ll stop it here. It is a Robin Hobb novel so I recommend it despite its flaws. What it did manage extremely well is making me want to read the next book – and finish the story of the Fitz and the Fool.

THE GOOD: Beautiful language showing strong, independent characters and their incredible development.
THE BAD: Drags a lot during the beginning and doesn’t really have a well-rounded ending.
THE VERDICT: Any Robin Hobb book is worth reading. If you’ve come this far in the trilogy of trilogies, then you’ll like it.