Aaaaaaand we’re back. I like it when book series continually grow and become better as they move along. Terry Pratchett has created a wonderful heroine with Tiffany Aching and so far, every book has been better than the last. I’m already sad that I only have one more Tiffany-book ahead of me but, hey, maybe Sir Terry will write another adventure for the plucky young witch. I’m certainly crossing my fingers. 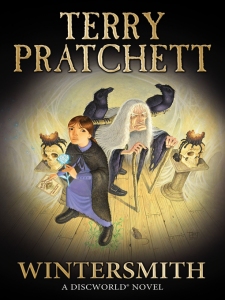 First sentence: When the storm came, it hit the hills like a hammer.

Tiffany Aching is a trainee witch — now working for the seriously scary Miss Treason. But when Tiffany witnesses the Dark Dance — the crossover from summer to winter — she does what no one has ever done before and leaps into the dance. Into the oldest story there ever is. And draws the attention of the Wintersmith himself.
As Tiffany-shaped snowflakes hammer down on the land, can Tiffany deal with the consequences of her actions? Even with the help of Granny Weatherwax and the Nac Mac Feegle — the fightin’, thievin’ pictsies who are prepared to lay down their lives for their “big wee hag.”

Oh Tiffany, how much richer YA literature has become because of you. This 13-year-old girl may be clever and kind, but even young witches listening to their second and third thoughts sometimes make mistakes. This is a book about such a girl, making a rather big mistake – and then dealing with it, making things right again.

Tiffany Aching is now apprenticed to a new witch, the frightening and very odd Miss Treason. Now that’s a witch the way you imagine it. Blind and deaf, she borrows the eyes and ears of unfortunate creatures around her. May I draw your attention to the (beautifully detailed) cover, with her two seeing eye crows perched on her back? Tiffany wouldn’t be Tiffany if she didn’t just accept that Miss Treason is strange and get on with the job. And I was as surprised as Tiffany when certain things are revealed about the terrifying old lady in the black house. Terry Pratchett has created an entire cast of characters that is lovable and diverse and – despite their witchiness – utterly human. Up until now I thought Granny Weatherwax was the coolest person on Discworld but Miss Treason may just give her a run for her money.

iffany is slowly growing up and makes sure everybody knows that Roland is not her beau but simply a friend who writes letters. Ahem. I was delighted to see more of Roland in this novel and couldn’t help shouting “awesome” whenever he outsmarted his terrible aunts. But then, I had the urge to shout “awesome” on nearly every page. Whenever we don’t get to see interesting and highly amusing sides to people’s characters (Granny Weatherwax now owns a kitten called You), Terry Pratchett lets us in on the secrets of Discworld. I will never forget a certain Boffo, nor the trip to the underworld with the Nac Mac Feegle. But this book isn’t called Wintersmith for nothing and while the story is still centered around Tiffany Aching growing up and becoming a witch, Pratchett managed to build his own mythology by creating the Wintersmith and the Summer Lady. Needless to say, I loved every bit of it.

I was introduced to a Discworld regular in this volume. Nanny Ogg – who lives at Tir Nani Ogg (that still cracks me up so much) – is not only a kind, apple-faced old lady but from what’s between the lines, she used to get a lot of attention from the men. And enjoy it. I couldn’t be happier to see a female character who may or may not have lead a promiscuous life but isn’t judged for it. Plus, she and Granny Weatherwax have been best friends for ages, that makes Nanny Ogg cool from the get go. I used to think the Guards were my favorite Discworld inhabitants but looking at these last Reviews of Gushing Love, I may be more of a witch girl… (*furiously juts down Witches books on top of TBR list*)

Most of this book is laugh-out-loud funny, with jokes ranging from silly to clever to absolutely idiotic. I chuckled constantly. But again, Sir Terry adds a deep and serious layer to it and shows us that his characters are more than just stand-ins for a good joke. In the last book, Granny Weatherwax said that witches can work together, hard as that may be, and here we get to see exactly that happening, in one heartbreaking and glorious chapter. Maybe I like Tiffany so much because, apart from her powers and cleverness, she is simply a good person. If helping her enemy means making sure that innocent people won’t be hurt, she’ll do it in a heartbeat. That’s the kind of rolemodel I’d want for my children and I’ll be sure to put these books into all the pudgy little child-hands in my family.

THE GOOD: A fun, adventurous story about growing up, making mistakes and taking on responsibility. Full of hilarious moments, characters I fell in love with, and even a trip to the underworld.
THE BAD: I liked the ending, but it felt a bit chaotic.
BONUS: Granny Weatherwax has a kitten!
THE VERDICT: If you never heard of Tiffany Aching, go pick up The Wee Free Men now. If you enjoy good YA fiction, like to laugh and watch brilliant characters grow up, this is for you.