Neither cover nor synopsis would have convinced me of buying this book – our friendly neighbourhood Booksmugglers, however…. September Girls is surrounded by an interesting kind of buzz and seems to divide its readers into two rather extreme camps. On the one side, people call it incredibly sexist, and on the other, it is hailed as a wonderfully feminist book that examines gender roles and puts a spin on them. Wait, what?
This sounded like something I had to read myself, and boy, do I wish I hadn’t. 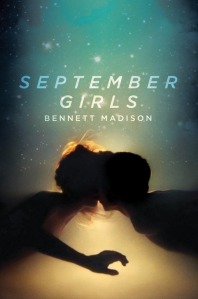 First sentence: The summer following the winter that my mother took off into something called Woemn’s Land for what I could only guess would be all eternity, my father decided that there was no choice but for him to quit his despised job and take me and my brother to the beach for at least the entire summer and possibly longer.

In September Girls, Sam is spending the summer in a beach town filled with beautiful blond girls who all seem inexplicably attracted to him. But that’s not the only reason why he thinks the Girls are strange. They only wear flats because heels make their feet bleed. They never go swimming in the water. And they all want something from him.
Sam finds himself in an unexpected summer romance when he falls for one of the Girls, DeeDee. But as they get closer, she pulls away without explanation. Sam knows that if he is going to win her back, he’ll have to learn the Girls’ secret.

Having spent the last few weeks with this book, the overwhelming feeling I get at the end of it is relief that it’s over. I actually made it through… at a few points, I didn’t think I would. This book begged to be thrown against a wall, then suddenly showed a spark of imagination, then wanted to hit the wall again.

Many people have said it all comes down to interpretation, and that is absolutely true. (Read the following quotes from the book and tell me how many ways there are of interpreting them, exactly…) Between the chapters told by Sam and the short chapters from the Girls’ point of view, there is a world of differences. Not only are the latter actually well-written, they do examine stereotypes and gender roles, and they do so without being blunt or preachy. Not so the rest of the story. Here’s the (spoiler-free) plot: Sam goes to the beach. Tons of gorgeous, yellow-haired beauties want him. He thinks about All The Things. The mystery – obvious to anyone who reads the first chapters with even the most fleeting attention – gets “revealed”. Sentimental end. Nothing’s changed for Sam.

Let’s take a look at the handful of characters we get to meet in this strange book.
Enter Jeff, Sam’s brother, with one of his smart ideas about the beach full of Barbies.

“Oh, who gives a fuck,” Jeff  said. “The point is they’re hot and they’re here. I just hope they’re already drunk when we get to the party. I hope they’re ready for a piece of this.” He groped his croch obnoxiously […]

Mmh… yes, I can hardly resist. But let’s not be too hard on Jeff – he’s actually alright (because silent) most of the time. Instead, please also look at Sebastian, Sam’s absent best friend, who is a particular brand of asshole:

Sebastian always advised me to ask questions when in doubt. “Girls like to talk about themselves. If you can’t think of anything to say, just ask some dumb questions about nothing, and if you’re lucky she’ll go off and you won’t have to say anything else for another ten minutes and she’ll think you’re a great listener.“

Apart from truly understanding women, Sebastian also would offer Sam this gem of wisdom. And don’t I love it when people use female genitals to describe a douchebag?

I actually thought about calling Sebastian for advice, but I could practically hear his voice: Wait, this is all over some girl? Don’t be such a fucking vagina, dude! I mean, dude! You go to the beach for a month and you turn into a human tampon.

Hell, even the women hate women. Here’s DeeDee talking about the bible:

“I like the parts about hos, even if they always come to a bad end. Eat a fucking apple, you’re a ho. Open a box, you’re a ho. Some guy looks at you: turn to stone, ho. See you later, ho. It’s always the same. The best one is Lilith – also a ho, but a different kind of ho. She went and got her own little thing going, and for that she gets to be an eternal demon queen, lucky her. No one likes a ho. Except when they do, which, obviously, is most of the time. Doesn’t make a difference; she always gets hers eventually.”

I understand that the author doesn’t share those views but created the characters to serve a purpose within the story. What that purpose is, other than to spit abuse at women, escapes me. Because 90% of the time, Sam swallows all the crap Jeff and Sebastian tell him, without reflection, without questioning it. In fact, he seems to think along the same lines, especially after his brother actually comes to care for Kristle, one of the girls (highlight by me):

After the brief initial foray into the subject of our insane mother, we were now pointedly avoiding all matters of substance, which included the topics of DeeDee, Dad, and Jeff’s recent queerification at the hands of Kristle.

The remaining 10% of the time, he realises that DeeDee is not “a ho” and also not like all the other girls – because she is SPECIAL! The only regular (read: non-supernatural) woman to play any role in this ridiculous story is Sam’s mother who is basically the Evil Feminist who left her family all alone because she discovered Facebook and Farmville and stumbled across the SCUM manifesto – yeah, Sam seriously blames Farmville for his mother leaving. Because, remember this, people who read this book: Feminists are evil and will all leave their poor family to cook and clean for themselves!

She does come back but except for a few tattoos and a new passion for life, nothing much seems to have changed. I honestly don’t understand her part in the story. If there’s a lesson here, I don’t see it. If there is a message – feminist or otherwise – I didn’t catch it.

If we leave all of these issues aside (and trust me, it’s hard to do) and simply take a look at the story, we won’t find much. My best guess is that this is supposed to be Sam’s coming-of-age tale, not just because he loses his virginity but because there is nothing else here. Reading 300 pages about a rich white boy’s problems in a voice that rivals Holden Caulfield’s is not my idea of fun. The only thing left is the “mystery”. Sam and Jeff see a naked girl stumbling out of the sea on their first night at the beach. Then, DeeDee drops this line (as a Disney fan, I actually smirked):

It doesn’t take a rocket scientist to figure out what the Girls are. They are all thin and blonde and beautiful, and for some reason they all have their eye set on Sam. Well isn’t this a 17-year-old’s wet dream? But the suspense (which isn’t there) hinges on this being a mystery, a secret to be discovered. For two thirds of the book, Sam is clueless, and when all is finally revealed, it is as anticlimactic as you can imagine – excepting, of course, Sam’s actual climax because he finally gets to use his magical penis (and I’m not kidding, it is magical).

The bulk of the story is Sam’s thoughts about the world, his penis, the beach, the Girls, and his penis. A lot of people had issues with Sam thinking about masturbation or his penis. I had no problem with that, whatsoever. It’s sad if I have to explain this, but everybody masturbates. It is a natural, healthy thing to do and I totally get that – as a 17-year-old boy – Sam sometimes just has the urge to be alone so he can have a quiet moment with himself… so to speak. I also didn’t mind the cussing, but then I never do. What did bother me was the overall style of the language. If characters use “like” as a filler in dialogue, that’s fine and probably accurate. But please, don’t use it in descriptions!

The same goes for everybody saying “dude” all the time. Do people really talk like that? Even without the “dudes”, the language just didn’t make sense. The pseudo-poetic blah-blah got on my nerves pretty quickly but when I stumble across things like this, it’s all over (highlight by me):

[…]from blond to blondest, all with full, glossy lips and eyes that floated an inch in front of their faces, suspended in deep pools of liquid liner.

What? Eyes that float in front of faces?? That’s not poetic, that is just dumb.

Why, if I hated the book that much, did I continue reading then? Because, every so often, between two chapters of Sam’s boring, douchebag ramblings, there were these special chapters. Chapters told from the point of view of the Girls. In these short interludes, they talk about beauty as the only weapon left to them, they talk about learning to make themselves fit into this world they were thrown into. These chapters are the only thing I interpreted as remotely feminist, and had this been a story written in that voice, with these characters, dealing with the issues at hand in that way, I would probably have loved the book. Sadly, we get Sam.

Like I said above, I am glad it’s over and I don’t have to deal with the bland, two-dimensional characters anymore. If this was supposed to be a romance, it failed. I cared about none of the characters – except in the Girls’ chapters, where I cared about all of them – and couldn’t get behind the sudden outburst of love. Sam doesn’t really grow much, even though he says he did, and still enjoys his friend Sebastian’s pick-up-artist level hate for women.

Ultimately, the question I have to ask myself is: Do the few well-written short chapters redeem the blatant sexism, misogyny, lack of plot, and flat, douchebag characters? The answer, for me at least, is no.

THE GOOD: The chapters in italics, told by the Girls.
THE BAD: Read what I wrote above and take your pick.
THE VERDICT: A waste of time and money. An incredibly boring, pretentious story that spews hate for women on almost every page.