Sometimes, I discover things backwards. As I’m participating in Worlds Without Ends’ Women of Genre Fiction challenge and have discovered great, great authors, I came across this little book called Ico: Castle in the Mist by Miyuki Miyabe. The review was favorable, the plot sounded intriguing, so I went out and got it. The author mentions right in the preface that this is a novelization (of sorts) of the eponymous PlayStation game. I had no idea and, honeslty, found it a bit off-putting. Novelizations (of movies or games) usually aren’t that good.
Then a few weeks ago, I found a used copy of the remastered PS-game of Ico and its companion The Shadow of Colossus – of course I bought it and started playing. After an hour, I knew I was going to give the book a chance. The atmosphere and story provide wonderful fodder for a gripping fantasy story.

ICO: Castle in the Mist
by Miyuki Miyabe

When a boy named Ico grows long curved horns overnight, his fate has been sealed – he is to be sacrificed in the Castle in the Mist. But in the castle, Ico meets a young girl named Yorda imprisoned in its halls. Alone they will die, but together Ico and Yorda might just be able to defy their destinies and escape the magic of the castle.
Based on the video game filmmaker Guillemo del Toro (Hellboy, Pan’s Labyrinth) called a “masterpiece”, Japan’s leading fantasist Miyuki Miyabe has crafted a tale of magic, loss, and love that will never be forgotten.

The PlayStation game starts when a young boy with horns growing out of his head gets locked up in the Castle in the Mist as a sacrifice.  The story kicks off when he frees a girl, dressed all in white, from a cage in the tower. The book lets us know what happened before in what was probably my favorite part of the entire story.

Ico didn’t live in a vaccum before he became the sacrifice to the Castle in the Mist. He had a family, friends, and a village full of people who knew and cared about him. It was in these first chapters that I found my favorite character. Toto, Ico’s best friend, is determined to save Ico and, if it isn’t too difficult, save the world from the evil powers of the Castle in the Mist. He is proactive, he is lovable, and is a convincing young boy with a good heart and a slightly befuddled brain.

Once Ico gets locked up in the Castle – this is where the game starts – the story slows down by definition. Ico is alone and even when he finds Yorda, caged at the top of the tower, there isn’t much dialogue because Yorda doesn’t speak. Even when she does, he can’t understand her language. Descriptions of the two wandering through the castle follow. Some are almost a play-by-play of what you have to do in the game to get out of a particularly riddling room and as such, weren’t very good storytelling. They weren’t even very good as a game guide. Miyuki Miyabe tried to spice it up by the visions that haunt Ico whenever he touches Yorda’s hand, or that he sees randomly in the vast halls of the Castle. Still, the second part of the novel was hard to read and bordered on boring.

In the third part, my interest peaked again. We get to see Yorda’s side of the story and, finally, other characters are involved. This peek into the past offers not only answers to some of the most pressing questions, it also shows Yorda – though isolated and essentially locked up in the Castle – surrounded by other people. It involves politics to some degree, more mysteries, danger and – YES – dialogue. I rarely find myself aching for dialogue this much, but in a book like this, it was a welcome change. Although this part focuses mainly on Yorda, her feelings, questions, and memories, I again found myself drawn to the side characters. The life they breathed into the story was much needed and kept me going for a while longer.

My biggest gripe was the amount of description. That’s the danger of turning a video game into a novel… the author seemed to feel the need to describe Ico’s surroundings in such detail that the readers know each part of the Castle as they saw them in the game. The problem is obivous. This leads to page-long descriptions of any given room’s layout, including chains hanging down from the ceiling which can be used for climbing up. In fact, details that – in the game – are there as a riddle for the player to figure out, aren’t really all that important for the plot. When Ico explores a cave by a waterfall for what seemed like 20 pages, I was close to giving up. I don’t need to know where exactly he puts his feet, when he takes a jump from which wall to which, what hanging vines help him swing from one rock to another… these are things that are intriguing in a game, where you actively play the protagonist and need to think in order to work these issues out. In a prose story, it slows the plot down to an almost-standstill.

Which leads neatly into my second biggest problem. Ico, though the hero of this story, is an incredibly passive character. Sure, he runs around the castle, looking for ways out, but he always – ALWAYS – has to be told what to do. He doesn’t discover any of the answers himself, he is either shown them through visions or by other characters. The queen, for example, reveals a great deal of her plans because she thinks herself safe. She didn’t come across as stupid, just overly confident. 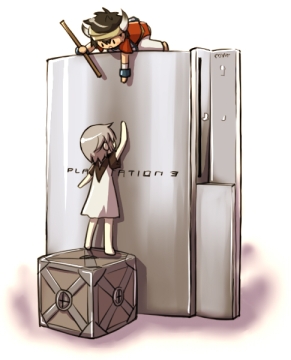 I admit I feel the urge to cut the author some slack. I only played the game halfway through (because Yorda is not just helpless, she’s useless!) but there isn’t really much information in-game that can be used for a novel. As such, Miyuki Miyabe did a commendable job, giving the Castle, Ico, and Yorda a backstory that made sense in its own way. Of course, the characters are painted extremely black and white – so literally, in fact, that the queen usually appears wearing pitch black dresses, and Yorda being clad in all white. But that’s a problem I’m willing to forgive. Naturally, the hero is going to be good. In the game, we are playing him, and we’re the good guys…

My feelings are rather mixed. I absolutely loved the completely made-up bits, I loved the invented side characters and the mythology Miyabe came up with. I hated the endless descriptions. That’s as simple as I can put it. I wouldn’t necessarily recommend this book, but I was enchanted enough to pick up another novel by the same author. One that came completely out of her imagination, without a bothersome video game to get in the way of good storytelling.

2 thoughts on “Miyuki Miyabe – ICO, Castle in the Mist”

Hello. I am Dina, and I am a book addict. I'm from Austria and, apart from reading, I enjoy movies, video games, thunderstorms, eternally bickering couples and anything made of chocolate.