Flavia de Luce is a companion I don’t want to catch up to. She may not get me as excited as Harry Potter once did, but the upside of that is that I can restrain myself a little bit after every book. And trust me, knowing that there are two more books in this series waiting for me, is a great comfort. Let me never be Flavia-less. 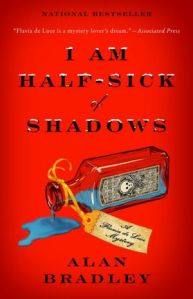 I AM HALF-SICK OF SHADOWS
by Alan Bradley

First sentence: Tendrils of raw fog floated up from the ice like agonized spirits departing their bodies.

Precocious Flavia de Luce — an eleven-year-old sleuth with a passion for chemistry and a penchant for crime-solving — is tucked away in her laboratory, whipping up a concoction to ensnare Saint Nick. Amid a blizzard, the village gathers at Buckshaw to watch famed Phyllis Wyvern perform. After midnight, a body is found strangled by film. Flavia investigates.

This is my favorite Flavia de Luce mystery so far. Despite work, which is still crazy and time-consuming and tiring, I managed to eat up this book in only a few days. It’s Christmas time in the village of Bishop’s Lacey and Flavia’s latest chemical plans involve catching Saint Nick red-handed. Her eleven-year-old mind may know deep down that there is no such thing as Father Christmas, but Flavia is also enough of a scientist to better make sure there is proof.

But then a film crew comes to Buckshaw – a desperate attempt by Flavia’s father to make some money to be able to keep the house. There will be a movie made at Buckshaw, and famous movie star Phyllis Wyvern will be the leading actress. With her this sparkling movie goddess brings, you guessed it, murder. The police is involved early on but again, it is Flavia who will solve the case and save the day.

I had almost forgotten how charming Flavia’s voice is. She is precocious and clever, yet deeply vulnerable when it comes to her cruel sisters. Jayne Entwistle, the audiobook narrator, brings her to life so perfectly, it’s like you’re there. But despite being funny and playing the grown-ups just right, Flavia is actually quite a tragic character. There hasn’t been a single volume in the series that doesn’t bring up Harriett, her dead mother. As with the books that came before, the family situation and dynamics interested me much more than the murder mystery. Flavia sees her laboratory as a sanctuary and makes do with what love she gets from Mrs. Buckett and Dogger. But it is very clear that she yearns for some affection from her father and some peace from her sisters.

Daphne and Ophelia, the older sisters in question, mostly seem like evil step sisters from a fairy tale. They love telling Flavia that she is an unwanted child, that random things are her fault, that Harriett didn’t want her in the first place. But there are those rare moments of de Luce truce, when they show that, despite their practical jokes and evil jibes, they do love their little sister – even if they only admit it unwillingly. Dogger, the man for odd jobs in the house, is still one of my favorite characters, and Aunt Felicity showed a surprising new side that made me grin for an entire afternoon. Should people stop being killed in their vicinity some day, the de Luce family would still never be boring.

With the arrival of the famous and beloved film star Phyllis Wyvern comes another treat for fans of the series. A performance of the balcony scene from Romeo and Juliet brings almost the entire village to Buckshaw. It’s been a while since I read the last book, but seeing old characters again was like meeting up with old friends. The word that keeps coming to mind is delighful. All their quirks combined in one place, it’s like an explosion of hilarity just waiting to happen.

Everything about this book was wonderful. Flavia is still one of the coolest, most bad-ass child characters I have ever read about, and I cannot wait to go adventuring with her again. What chemical concoction will she brew up next time to take revenge on her sisters? How will she help the police catch the next culprit (we know there will be another murder evenutally)? And will the family ever get over the death of their beloved mother? It almost doesn’t make a difference because as long as Flavia gets to tell her story, I know I’ll be well entertained. 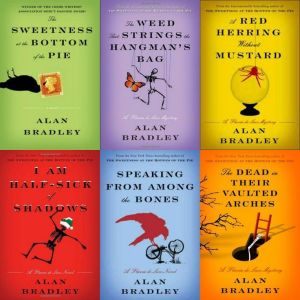 7 thoughts on “Alan Bradley – I Am Half-Sick of Shadows”