It’s Fairy Tale Frenzy, everyone! Who would have thought my faith in fairy tale retellings could be restored so easily? A few years ago, I had a very bad hand at grabbing books written for young adults, but I seem to have gotten over that streak of bad luck. For FTF, my first two books have both been really good. 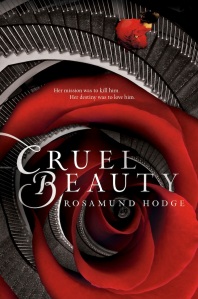 First sentence: I was raised to marry a monster.

Graceling meets Beauty and the Beast in this sweeping fantasy about one girl’s journey to fulfill her destiny and the monster who gets in her way-by stealing her heart.

Based on the classic fairy tale Beauty and the Beast, Cruel Beauty is a dazzling love story about our deepest desires and their power to change our destiny.
Since birth, Nyx has been betrothed to the evil ruler of her kingdom – all because of a foolish bargain struck by her father. And since birth, she has been in training to kill him. With no choice but to fulfill her duty, Nyx resents her family for never trying to save her and hates herself for wanting to escape her fate. Still, on her seventeenth birthday, Nyx abandons everything she’s ever known to marry the all-powerful, immortal Ignifex. Her plan? Seduce him, destroy his enchanted castle, and break the nine-hundred-year-old curse he put on her people.
But Ignifex is not at all what Nyx expected. The strangely charming lord beguiles her, and his castle – a shifting maze of magical rooms – enthralls her. As Nyx searches for a way to free her homeland by uncovering Ignifex’s secrets, she finds herself unwillingly drawn to him. Even if she could bring herself to love her sworn enemy, how can she refuse her duty to kill him? With time running out, Nyx must decide what is more important: the future of her kingdom, or the man she was never supposed to love.

Oh, this started out so well. Nyx dreads the day that she will be married off to the Gentle Lord, the demon in the crumbling castle on the hill, a tyrant who has kept her entire people locked up under a parchment dome, their world cut off from the rest of the universe. Heavily based on Greek mythology, with some added magic – Hermetic sigils – a group of people have made a plan to kill the Gentle Lord, and Nyx is front and center of that plan.

I loved the atmosphere of this novel. It starts out quite dark, with Nyx questioning herself and her sacrifice, and with her very human feelings of jealousy towards her sister. Despite loving Astraia dearly, Nyx can’t help but feel treated unfairly for having pulled this lot instead of her sister’s comfortable future. Our heroine is, in general, a swirling mix of emotions, and not all of them a good. In that, she stands out from fairy tale princesses, because unlike the all-good, all-pure girls who usually save princes, Nyx is utterly human. She wants to do good, of course, but she also has moments of cruelty, with no ulterior motive other than enjoying a little bit of revenge. It made for a complex character that I loved to follow through the scary castle.

And then the romance happened. This sounds like I’m somehow opposed to her falling in love – I am absolutely not. I was on the edge of my seat during the moments between Nyx and Ignifex because I never knew whether they were going to kill or kiss each other. Their conversations weren’t particularly clever, but there was an underlying threat of danger and a ton of unresolved sexual tension. So the story pushed some of my very favorite buttons.

Unfortunately, it all goes up in flames of cheesiness and lazy writing. Like Sunday in Enchanted, it doesn’t take Nyx very long to fall in deep, deep love with not only Ignifex, but also his shadow, Shade. Despite being a fairy tale retelling (and “true love” happening even faster in actual fairy tales, and with even less of a basis), it still bothered me. Can’t literary heroines admit that they have a crush, that they feel slightly tingly when he enters the room, that they may have fallen in lust? No, it’s always true love, right away, from the second or third kiss onward.

Which leads me to where the writing started becoming lazy. There are a lot of kisses in Cruel Beauty, and while the first few ones – plus the ones that were important for plot-reasons – were well-described and butterfly-worthy, after a certain point, the author seemed to just have given up. Suddenly, all we get is “and then they kissed” or “suddenly he kissed me”. A throwaway line here and there to make sure we know that Nyx and Shade or Ignifex are still a thing.

The main story arc, however, doesn’t merely revolve around a romance/love-triangle. Nyx is trying to save the world! And the Gentle Lord’s castle is as much a mystery as the question how to destroy him. Killing her husband after actually falling in love with him presents an added difficulty, to say the least. But Ignifex is wrapped in secrets within secrets, and I kept reading as much to find out these secrets as for the resolution of the romance.

It’s a clever twist on Greek mythology, but I was still somewhat disappointed in the ending. Not only are the secrets revealed with a lot of exposition, the solution comes too easily after a lot of useless work. What’s more, Nyx worked the entire time to figure out the riddle that is Ignifex and his castle, and in the end has to be told everything anyway. She is presented as a clever, active young woman with a capacity for independent thought and yet, everything she does learn comes from someone else. Shade reveals things, birds reveal things, other beings give her hints and – in the end – straight up tell her the solution via convenient vision. All she had to do was walk around the house a lot. No thinking involved. Which makes me sad because I’m sure, if given the chance (by the author, that is), Nyx could have easily figured it out for herself. That requires careful planning and foreshadowing of course, and that’s the area the author still has to work on.

There were parts of this book that I loved. The imagery is gorgeous and would make a stunning movie, animation, illustrated novel, what-have-you. The background of Nyx’s world, how Greek mythology and the Beauty and the Beast fairy tale intermingle, works beautifully. But then there were the parts I hated. Not just disliked, hated. Nyx’s fickleness, her way to trust people much too easily, especially for someone who grew up the way she did. The writing that grew lazy towards the end, the big solution and wannabe-plot twist. It’s difficult to decide yay or nay with this book.

But for its originality and the darkness of its tone, I lean just slightly towards a positive opinion. Seeing as this is Rosamund Hodge’s debut novel, I am curious to find out how she does in her next one. There is a lot of potential for greatness and I wouldn’t want to miss it. Especially since the next book will be a spin on Little Red Riding Hood.