Lauren Beukes just blew me away with last year’s The Shining Girls, so naturally I jumped at the invitation to read an ARC of her latest novel. This was such an amazing book and probably the first novel I ever read that felt truly contemporary in its use of social media. Lots of love ahead. 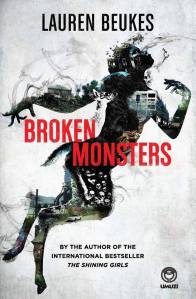 IN A BROKEN CITY, A DISTURBED KILLER IS TRYING TO REMAKE THE WORLD IN HIS IMAGE.
Detective Gabriella Versado has seen a lot of bodies. But this one is unique even by Detroit’s standards: half-boy, half-deer, somehow fused together. And it’s only the first.
As winter closes in on Detroit, strange and disturbing corpses start turning up in unusual places, pulling several lives into the killer’s orbit.
Gabi has to juggle the most harrowing case of her career with being a single mom to her troubled teen daughter Layla.
Layla, egged on by her best friend Cas, is playing a dangerous game with an online predator.
Broken Monsters is a dark and gripping thriller about the death of the American Dream, online fame, creativity, compromise and the undercurrents of the world we live in right now.

I’m not a big reader of horror novels or, indeed, anything other than fantasy and science fiction. Lauren Beukes has been settled fairly well into the SFF genre, but The Shining Girls was much more horror than science fiction (if you forget about the part where the serial killer is also a time-traveller). It goes to show that trying out new things is usually a good idea – at least if it leads people like me to authors like Lauren Beukes.

Broken Monsters is many things. A police procedural about hunting down a serial killer, a portrait of Detroit, a psycho-thriller, and a healthy dose of reality. Because it was so fantastically done, let met talk about that bit first.

Among the protagonists is Detective Versado’s teenage daughter, Layla. She and her best friend are  probably the most realistic teenagers I’ve ever read about. They clearly live in our time, although there are no mentions of what year the story is set it. They use facebook, know about reddit and 4chan, hell, youtube has a huge influence on their lives. The internet is often forgotten or boiled down in fiction. Like a fictional universe – whether it’s on TV or in a novel – only has those parts of the internet that are useful to the story (i.e. Wikipedia or Google) but none of the ugly sides. Truth is, and we all know this, the internet as a whole doesn’t have rules. It doesn’t have ethis. Once something bad is out there, you can never ever get rid of it completely. And these ones and zeroes somewhere on a server have real influence on people’s lives. Lauren Beukes does an A-MA-ZING job portraying this. And she doesn’t overdo it. Her characters sometimes speak in memes, but only as far as is realistic and believable. Layla regrets calling her cat NyanCat, for example, and her mother still makes fun of her for it. I won’t spoil anything but let’s just say that the internet (and the hunt for likes, views, or reddit gold) is a major player in this story, as it is in most of our lives. I wish more authors took that into consideration.

I’ve already talked about Layla in terms of her grounding the story in a certain time, but she is much more than that. She and her best friend Cas do stupid things, as teenagers will. Layla’s mother also happens to be on the case of the Detroit Monster, a serial killer who combines animals with human remains, to create “artwork” – or so we assume. Here’s the next surprise: I also never considered myself a fan of police procedurals but, boy, was I glued to the pages when reading about the investigation for the Detroit Monster. I could have spent hours and hours at the police station, following every single deputy on his or her part of the investigation. It was just all so damn interesting! Then again, maybe Lauren Beukes is just one hell of a great writer (yes… yes, she is).

The other characters – Jonno, the “citizen’s journalist”; TK, the homeless man with a horrible past; Clayton, the sculptor whose mind is decaying – were also vivid and very different types of people. Clayton’s chapters constantly sent chills down my back, I empathised with TK, and I kind of hated Jonno for the attention-seeking, greedy fuck-up that he is. On the other hand, I understood them all. There are no good or bad guys here. Every single character makes mistakes, every one of them does something good(ish). And you can’t know whether their next decision will be good or bad.

Lastly, the city of Detroit needs to be mentioned as a character in its own right. It came to life mostly through Jonno’s chapters, and gave me a real sense of being there. From graffiti artists to hipster coffee shops, to ruined buildings and soup kitchens for the homeless, we get to see a lot of the city, and not just through the eyes of someone who’s lived there all their life. You might think this was just the author cramming in exposition to create a nice setting, but it’s all relevant to the plot – which makes the book so amazing. 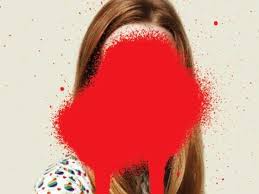 The writing is so on point, I really don’t know what else to say about it. Just like in The Shining Girls, Lauren Beukes doesn’t need 50-page chapters to set a scene, develop a character, and push the plot forward. It’s all done so effortlessly. There was not a single chapter, not even a page, that bored me or took me out of the plot. This is one of those books that you sink into and don’t come up for air until you’re done. Beukes also effortlessly wrote a cast of characters that represent groups of people who don’t get to shine much in SFF. Most of the characters are black or Mexican or biracial, one has diabetes – a trait that doesn’t take over the plot but stays present, nonetheless – one is homeless, and several have suffered through events that would give anyone PTSD. None of the characters are defined by their race or disability or past, but it follows them around wherever they go. Of course it influences their daily life. I loved reading about all of them and I loved seeing so much diversity in a book that is, ostentatiously, just about a crazy serial killer who glues together animals with humans.

There is one thing to be said about having the stomach flu – if you have to stay in bed all day, might as well bring a fantastic book. So take a weekend and make sure you have no appointments. Once you start reading, you’ll gobble this up, no interruptions allowed! I’m still in awe and can’t wait to see what Beukes does next.

When I am this much of a fangirl, I like to offer second opinions for you guys: