I’ve been wanting to read this ever since I heard it mentioned on the SF Squeecast. Oh, if only those guys knew how many recommendations of theirs I went out and bought. Seriously, I’m super sad the Squeecast is on hiatus for now. I hope they come back some day with more books and author guests and lots of squeeing. 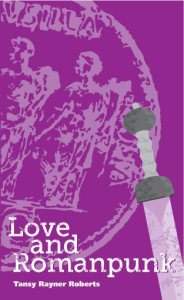 First sentence: Let us begin with the issue of most interest to future historians: I did not poison my uncle and husband, the Emperor Claudius.

Thousands of years ago, Julia Agrippina wrote the true history of her family, the Caesars. The document was lost, or destroyed, almost immediately. (It included more monsters than you might think.)
Hundreds of years ago, Fanny and Mary ran away from London with a debauched poet and his sister. (If it was the poet you are thinking of, the story would have ended far more happily, and with fewer people having their throats bitten out.)
Sometime in the near future, a community will live in a replica Roman city built in the Australian bush. It’s a sight to behold. (Shame about the manticores.)
Further in the future, the last man who guards the secret history of the world will discover that the past has a way of coming around to bite you. (He didn’t even know she had a thing for pointy teeth.)
The world is in greater danger than you ever suspected. Women named Julia are stronger than they appear. Don’t let your little brother make out with silver-eyed blondes. Immortal heroes really don’t fancy teenage girls. When love dies, there’s still opera. Family is everything. Monsters are everywhere. Yes, you do have to wear the damned toga.
History is not what you think it is.

This story collection contains four stories that are all connected to each other, more like a small mosaic novel than a regular author collection you might find elsewhere. This is a thing I like, as I have recently discovered through Angela Slatter’s books. However, reading Love and Romanpunk so soon after falling hard for another short story writer may have been bad for Tansy Rayner Roberts. Because as charming as her stories are, as cute as her ideas may be, they pale in comparison to Angela Slatter. But that’s just me.

In the first story, “Julia Agrippina’s Secret Family Bestiary”, we meet said Julia – one of many – and  encounter many Roman emperors. Julia tells the story of her family, of their demise, and how not all (or many) of their deaths can be attributed to such mundane means as poisons or old age. No, in fact, her family is haunted by mythological creatures. I find the idea of manticores, lamia, griffins, and harpies wonderful but in a short story, this was a bit much. This story disguised as a bestiary still tells a nice tale, but there was simply an overload of monsters and instead of being terrifying or even very interesting, it became ridiculous pretty quickly. Also, if you’re not too familiar with Roman history (most of what I know, I have learned from the TV show Rome), the names and relations can get seriously confusing because people are born and die rather quickly. Before you get to remember this guy’s name, he’s already dead or married his own niece, or poisoned his mother or whatever… This was my least favorite story of the bunch.

The second story focuses on one creature, the lamia, and features a poet, his mistress, his sister, and mistress’ sister. This is a vampire story, but a pretty good one. There is a nice twist about who the characters really are that I won’t spoil here, and I was surprised by my attachment to them at the end of the story. They’re not exactly supposed to be sympathetic, feeding on the blood of the innocent and all, but I kind of liked them anyway.

My favorite story by far was “The Patrician” which features an immortal monster-killer named Julius who hunts down the last of whatever monster species is still around. Coincidence throws him in the path of Clea, a young girl, who gets tangled up in his monster slaying. Throughout her life, they meet again and again, forming a special friendship that was beautifully described. The monsters fade into the background in this character-driven, almost philosophical piece, whose ending was both beautiful and a little heartbreaking.

The last story which gives the book part of its title, “Romanpunk”, was just pure fun. A man gets stuck on an airship at a party with his ex-girlfriend that he really, really, really wanted to avoid. She’s not your typical crazy ex-girlfriend, though. Nope, she wants immortality at any price. Enter more lamias, more monster-slaying, and a fair amount of sass. The story even features another Julia – and Julias are powerful in Tansy Rayner Roberts’ world.

I started out not liking this collection too much, then it kind of grew on me, and now thinking back on it, it’s actually quite lovely the way it moves through time, ties one story to the next, and doesn’t take itself too seriously. Apart from Julia Agrippina’s mess of a bestiary, all the stories had good pacing, intriguing characters, and a plot I was happy to follow along. Maybe a few more pages to flesh out certain parts wouldn’t have hurt but I’ll definitely try more books by Tansy Rayner Roberts. Aside from reading more short story collections than ever before, I also seem to be developing a thing for Australian authors.