I’m all caught up on the Lunar Chronicles! Until the short fiction collection Stars Above comes out, I can officially say I have read all the books in the series, including all the short stories available so far. That’s a good start into the new year and I promise, you won’t hear me talk about mediocre books in fangirlish ways for a while now. 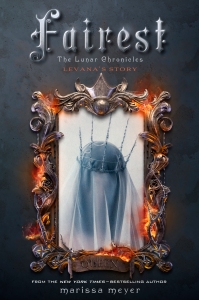 First sentence: She was lying on a burning pyre, hot coals beneath her back.

Mirror, mirror on the wall,
Who is the fairest of them all?
Fans of the Lunar Chronicles know Queen Levana as a ruler who uses her “glamour” to gain power. But long before she crossed paths with Cinder, Scarlet, and Cress, Levana lived a very different story – a story that has never been told . . . until now.

Queen Levana was simultaneously one of the weakest and the strongest parts of The Lunar Chronicles as a whole. She is an Evil Queen of Evil whose Evilness is so obvious and unsubtle that I kept being surprised how nobody dared defy her. But then again, she is a Lunar and their gift for mind manipulation is a cool idea that would put terror into the bravest of people. When somebody can control your body and make you do awful things to yourself (or the people you love), I understand that you’d not want to make that person angry…

But Levana was a child once, too. This is her story. She grows up spoiled in the palace of Artemisia, her coldness eclipsed only by her sister Channery. Channery is not outright evil but, my gods, what a spoiled, careless, heartless brat! She just doesn’t care about other people and she enjoys being cruel. So yeah, maybe evil after all. Levana has sympathetic moments, although she clearly isn’t what I’d call an empathetic person. Her parents’ death leaves her cold and more annoyed at having to go to a funeral. It’s the effort she has to put into looking sad that bothers her, not the fact that she is now an orphan.

But Levana is capable of love (or so she thinks, at least). She falls in love with a palace guard and as things unfold, that love and her hatred of her sister becomes the catalyst for her entire personality. Fairest was a strange book and Marissa Meyer walked a fine line with it. The things she did well were Levana’s different sides. She doesn’t start out as a purely good person, but she’s not completely bad either. Levana shows different facets of her character and Fairest makes readers understand why certain aspects of her character were slowly killed off while others were fed by circumstance.

I found this pretty impressive because I didn’t think it was possible to make the Queen Bitch that is Levana appear sympathetic in any way whatsoever. But there are moments when – while not condoning her actions – the reasons for why she is the way she is are understandable to a point. This tightrope walk is a difficult thing to pull of and Meyer didn’t exactly nail it. Levana seems to have mood swings and they don’t always make sense. In one moment she would be a cold-hearted, naive teenager, then she would have downright evil thoughts of murder, then again she would read like a little lost girl who just wants to be loved by the man she has chosen. These different feelings don’t appear organically but seem almost accidental at times.

Story-wise, Fairest doesn’t offer much and the amount of repetition – especially when it came to Levana’s “love story” – got rather annoying. And, whoa, that love story was creepy! But as a bit of backstory, as a bridge book between two parts of the series, as an illustration of the most evil character in the books, this wasn’t half bad. It’s not a riveting read, because we know the outcome of the story beforehand and the journey just wasn’t exciting or surprising enough. But it wasn’t a bad book either. 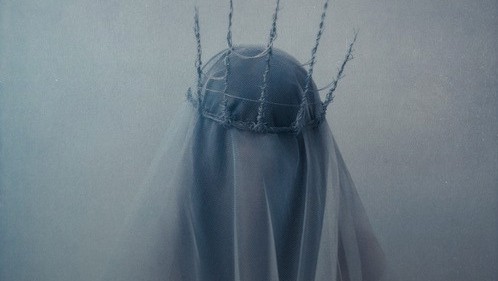 This story is filled with moments of darkness, much more so than the main story arc of the series. Levana isn’t born into an easy life, no matter what we think about royalty. She is psychologically terrorised by her sister, she suffers physical harm and feels constantly worthless because of the scars she wears. She believes herself in love (I don’t know if I buy her actually loving anyone) but things don’t work out the way they should. This is nothing like a fairy tale and no prince is in sight to come rescue her. So Levana does what she can to take matters into her own hands. While her methods are terrifying, the motive is understandable. Under that veil, under that crown, there is a person who was once a girl with hopes and dreams. This is the story of how they were shattered.

I’ve had enough of The Lunar Chronicles for a while but I hold by my opinion that these are fun YA books, perfect for those times when you just don’t want perfect world-building or deep characters. If you go into this series without expecting much, you won’t be disappointed. In fact, you might be surprised at the moments of depth that creep up on you and peek around the corner. Fairest was NOT fun but highly interesting, in a look-into-a-microscope way.