Remember how much I loved Paul Cornell’s Tor.com novella Witches of Lychford? Well, there’s a sequel novella out tomorrow that builds on everything the first story did so well and invents a whole new – and super creepy – danger for our three witches to fight. I received an e-ARC of this book via Netgalley. Thank you to the wonderful people at Tor.com! 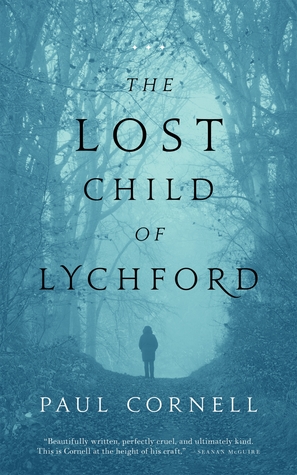 THE LOST CHILD OF LYCHFORD
by Paul Cornell

First sentence: The Reverend Lizzie Blackmore slowly blinked awake, and found, to her surprise, that she was already furious.

It’s December in the English village of Lychford – the first Christmas since an evil conglomerate tried to force open the borders between our world and… another.
Which means it’s Lizzie’s first Christmas as Reverend of St. Martin’s. Which means more stress, more expectation, more scrutiny by the congregation. Which means… well, business as usual, really.
Until the apparition of a small boy finds its way to Lizzie in the church. Is he a ghost? A vision? Something else? Whatever the truth, our trio of witches (they don’t approve of “coven”) are about to face their toughest battle, yet!
The Lost Child of Lychford is the sequel to Paul Cornell’s Witches of Lychford.

There is something utterly magical about how Paul Cornell draws you into his story within a few short sentences. It’s been a while since I read the first book but I immediately felt back at home in the small town of Lychford, and with the three resident witches, Judith, Lizzie, and Autum. A new evil is threatening their already stressful lives, what with Lizzie preparing for her first Christmas as the reverend, Autumn trying online dating, and Judith… well just being Judith and dealing with the demons she’s been dealing with for a while.

If, like me, you have forgotten certain bits about the first book, don’t worry. They are called back into memory easily, without bogging down the plot. And I absolutely loved the plot. All three witches get into serious trouble and the way Cornell wrote their descent into strange behaviors was so expertly done, I couldn’t pick any specific scene where the changes first happen. Like the witches, I only noticed something was way off when it was already too late!

Great characters in shitty, seemingly impossible to get out of situations is the best thing you can give to a reader. Whether it’s a little ghost boy following you around or the borders of reality turning all wobbly, a lot is going on in Lychford but Cornell juggles it all beautifully. There is not much time in a novella to explain things or slowly build up a threat, so I was really happy with the dread I felt at the dangers our witches have to face.

There were some truly creepy moments in here and the ghost boy is not the reason. Halloween may be over but if you want a little treat with just a hint of scary and a lot of heart, this book is for you. It was more the things that weren’t said that gave me the creeps. The way that the protagonists’ minds are warped means that we readers also get an unreliable version of events.

While not as much time is spent on introducing the characters – we know them already, after all – the plot is fast-paced and doesn’t let off until the end. The ending includes a crowning moment of awesome for one of the witches (not telling you which) as well as the hint of more to come. There are epic villains to be defeated and borders between worlds to save, and I for one hope that Paul Cornell and Tor.co will give us many more adventures with Judith, Lizzie, and Autum, these three witches who are so very different and work together so well.

4 thoughts on “Paul Cornell – The Lost Child of Lychford”