I have made no secret of my love for T. Kingfisher and her utterly charming fairy tale retellings. But T. Kingfisher is a pseudonym for Ursula Vernon who – being the same actual person – writes tales just as charming and, it so happens, draws her own comics as well. She also seems to adore wombats which makes me adore her. The tale of digger is a big one and all the more praise to the author for making every page a pleasure. 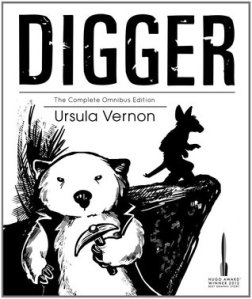 First sentence: I’ve been digging for a long time.

Digger is a story about a wombat.
More specifically, it is a story by author and artist Ursula Vernon about a particularly no-nonsense wombat who finds herself stuck on the wrong end of a one-way tunnel in a strange land where nonsense seems to be the specialty. Now with the help of a talking statue of a god, an outcast hyena, a shadow-being of indeterminate origin, and an oracular slug she seeks to find out where she is and how to go about getting back to her Warren.
With an irreverent sense of humor and a fantasy protagonist with a healthy dose of skepticism, Digger rapidly gained a huge following of devoted fans eager for the twice a week updates of the webcomic for the duration of the comic’s run. Digger’s story is now complete. It has been compiled in six bound volumes, each including additional content not posted online.

Digger is a wombat who finds herself in a tunnel with no way back. So she does what any sensible wombat would do in her place – she digs on until she comes up somewhere. This somewhere, it turns out, is in a temple for a statue of the god Ganesh who is trying to help Digger find her way back home. But there is magic at play and things are not quite as simple as just digging another tunnel. So Digger explores her surroundings, meets many strange and amazing creatures – hyenas with war paint, a prophetic slug, a bunch of monks, some of whom may or may not be insane, and a weird little shadow creature whom Digger tries to teach about life and morals.

I really don’t want to tell you anything about the plot because it is just such a joy following Digger and seeing how things unravel around her. She is the same kind of practical, no-nonsense heroine that Ursula Vernon writes in her fairy tale retellings, and as such is easy to love. But Digger is also a badass with her pickaxe and her claws. You wouldn’t think the ability to dig tunnels could come in so handy sometimes.

I especially enjoyed Digger’s relationships with the friends she finds along the way. Her goal is to somehow get back home, but because gods and magic and ancient myths are involved, she kind of has to save the world a little bit before going home. And although Digger doesn’t believe in gods, doesn’t think very highly of the monks she encounters, and definitely doesn’t agree with the dietary habits (especially the tea) of the hyena she meets, she’s a good sport and helps along. After all, while she’s stuck in a strange place, she may as well make herself useful.

The art, although all in black and white, is delightful. Digger and her companions come to life through simple lines but there is a lot of love for detail in the larger pieces. I discovered several fish with interesting headgear in the margins, who have no bearing on the plot whatsoever and seem to exist simply to delight the reader. I’m sure I haven’t caught all of these little easter eggs but I giggle every time I did.

At over 800 pages, Digger is a brick of a book, but I enjoyed every page. There are twists along the way, some of them heart-wrenching, others funny, and although the ending tore my heart out, the tone of the book overall is humerous. This was 800 pages of fun, with a lot of heart, the bravest (and coolest!) wombat I’ve ever read about, and despite some slower moving parts, it begs for a re-read. Ursula Vernon has created a memorable cast of characters, all of which kind of grow on you as you go along. You won’t even notice when it happens but suddenly, you care what happens to them which makes the ending all the more powerful. I absolutely loved it.

One thought on “Ursula Vernon – Digger”