If you’ve read my review of Sriduangkaew’s beautiful novella Winterglass, you know that my one gripe with it was that it felt so unfinished, like the beginning of a bigger story. Well, apparently the author felt the same because here is the sequel in what will probably be a trilogy.
There are some spoilers below for the first book in the series, although I think Winterglass is just as enjoyable to read even if you already know what happens. 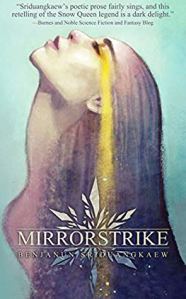 Opening line: In the house of the Winter Queen, even time itself slows.

With her mother’s blood fresh on her hands, Nuawa has learned that to overthrow the tyrant Winter Queen she must be as exact as a bullet… and as pitiless.
In the greatest city of winter, a revolt has broken out and General Lussadh has arrived to suppress it. She’s no stranger to treason, for this city is her home where she slaughtered her own family for the Winter Queen.
Accompanying the general to prove her loyalty, Nuawa confronts a rebel who once worked to end the queen’s reign and who now holds secrets that will cement the queen’s rule. But this is not Nuawa’s only predicament. A relentless killer has emerged and he means to hunt down anyone who holds in their heart a shard of the queen’s mirror. Like the general. Like Nuawa herself.
On these fields of tumult and shattered history, the queen’s purposes will at last be revealed, and both Lussadh and Nuawa tested to their limits.
One to wake. Two to bind. These are the laws that govern those of the glass.

There are few retellings that gripped me as much as Winterglass did. With striking language, brilliant characters, original world building and the beginning of a kick-ass plot, it had everything I wanted from a retelling. Some of the things I loved so much are continued in this sequel, although I have to say it could have used some more editing. The plot meanders and it felt like it couldn’t quite decide which direction it wanted to go. Are we still in a science-fantasy retelling? Because we drift off into very cheesy romance territory at times… but let’s start at the beginning.

Nuawa is now a lieutenant in the Winter Queen’s service and she’s also started a relationship with general Lussadh, that most intriguing of characters. Unfortunately, the characters and world building really stalled in this book, or in some cases was even less present than before. Nuawa’s goal is still destroying the Winter Queen, working closely by her enemy to discover weaknesses and exploit them. So far, so exciting. But instead of the active part she played in the first book, in this one she mostly just reacts to other people’s actions. She is still kick-ass and her character grows throughout the story, but she has much less agency than she did in Winterglass and the book was just a little less good for it.

One of the most interesting aspects of the first book was the world building. Set in an alternate Thailand (or at least South East Asia), winter rules supreme since the Winter Queen conquered the land. With people’s ghosts used for power, magical ghost kilns which extract those ghosts from living people, science-fantasy style chiurgeons who can perform unbelievable feats, and magic weapons that can kill someone by hurting their shadow, there was so much to discover, so many little things that I wanted to learn more about. Sadly, there is almost nothing new in this book about ghosts or the kilns or even how this conquered world even really works, government-wise. Most of those ideas are treated as throw-away lines here and there. It felt like the author had lost all drive to establish her world further, or maybe she hadn’t thought her ideas through to the end. What was imaginative in the first book felt like window dressing in this one.
The one thing Sriduangkaew does give her readers is more information about the Winter Queen’s origins and the power of those glass fragments that created her glass bearers. While interesting, that didn’t nearly reach the level of world building and lore from the first book.

As I already mentioned, the characters also seem to have lost a lot of their strength. I don’t mean physical strength – both Nuawa and Lussadh are still amazing fighters – but I’m talking more about their agency and personalities. Nuawa has done some crazy stuff in the first book in order to get close to the Winter Queen and achieve her goal of avenging her country and her family. Lussadh has equally been through horrible things, but while in Winterglass she was surrounded by a mesmerizing aura of mystery, all of that was gone in Mirrorstrike. It’s nice to see those two as a happy-ish couple but they exchanged some serioiusly cheesy lines and felt like cliché people from a bad romance story.
Nuawa does go through an interesting development, although it is lessened by the fact that it’s so blatantly stated instead of being shown subtly. She is warned that being a glass-bearer will turn her more and more to the Queen’s side, make her willing to help the Queen stay in power, and Nuawa feels that pull and has to fight it. But this also felt like something that came and went, being very visible in one chapter only to be almost forgotten in the next. Nuawa was such a standout strong character and now she felt kind of wishy-washy. Sometimes she feels how the Queen draws her in, then that’s all forgotten and she pursues her goal single-mindedly again.

As for the plot… that was the weakest part of the book. A lot of little things happen, only some of which pushed the plot forward, and most of which felt like distjointed scenes put together somehow. There is a plot line about traitors to the Queen plus some assassination attempts – and that just fizzles out. There is a new character who has connections to Nuawa’s past, and while I think that story will continue in the next book, it was also left hanging in this one, rather unceremoniously. What bothered me the most was that it felt like I could see through the writing. It felt like the author wanted to get a piece of information across – like the Winter Queen’s weakness or a hidden truth about Nuawa’s mothers – and the scene did just that, but nothing more. And I know the author can do more, she proved that over and over in the first book. I actually re-read Winterglass before starting this one and even on the second reading, that book was just amazing. Mirrorstrike felt like a bit of a mess in comparison, with no red thread to follow, random things happening here and there, but very little that connects it to the bigger plot hinted at in Winterglass.

But the one thing that still stands out and that made this still a very good book is the language. You kind of have to like that particular style, but if you do, you’ll love it. It’s lyrical, it has big words, and it flows beautifully. I did think that Sriduangkaew overdid it a few times in this book, maybe trying a tad too hard to sound poetic and ending up with something more resembling ridiculous, mostly during the romantic exchanges between Nuawa and Lussadh. But for most of the book, the prose is gorgeous and paints vivid pictures in the reader’s mind. And it kept me reading even though the somewhat disjointed plot kept confusing me.

This is definitely a case of middle book syndrome but at 160 pages, that is forgivable. The ending delivered a nice little twist (which made sure I’d want to read the next book) and, sadly, another super cheesy moment. But I’ll forgive that because I really finally want to know how the story ends and whether the Winter Queen can be vanquished. Now all I have to do is wait for the third book…