After coming across this trilogy on numerous Best of the Year lists and fantasy recommendations, I thought it was time for me to finally give Mark Lawrence a try and see what all the fuss is about. While it was definitely an entertaining read with some cool ideas, I didn’t think this first Book of the Ancestor was all that groundbreaking. 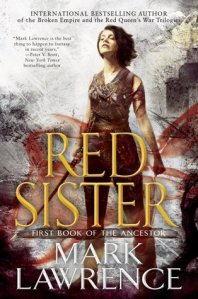 Opening line: It is important, when killing a nun, to ensure that you bring an army of sufficient size.

I was born for killing – the gods made me to ruin.
At the Convent of Sweet Mercy young girls are raised to be killers. In a few the old bloods show, gifting talents rarely seen since the tribes beached their ships on Abeth. Sweet Mercy hones its novices’ skills to deadly effect: it takes ten years to educate a Red Sister in the ways of blade and fist.
But even the mistresses of sword and shadow don’t truly understand what they have purchased when Nona Grey is brought to their halls as a bloodstained child of eight, falsely accused of murder: guilty of worse.
Stolen from the shadow of the noose, Nona is sought by powerful enemies, and for good reason. Despite the security and isolation of the convent her secret and violent past will find her out. Beneath a dying sun that shines upon a crumbling empire, Nona Grey must come to terms with her demons and learn to become a deadly assassin if she is to survive…

This is a difficult book to rate because it startet out so well, then went into a somewhat slumpy middle and then delivered an action-packed, cool ending. But was it cool enough for me to continue the series? I don’t know yet… And that says more than anything I’m about to write next because as much as I enjoyed this book, if I don’t really want to know what happens next, then at the very least it didn’t do its job as a trilogy starter.

Nine-year-old Nona is supposed to be hanged for attempted murder when the Abbess of Sweet Mercy saves her and takes her to be trained as a nun. We only learn short snippets about Nona’s blood-stained past and not all of those are always the truth but one thing is clear immediately: Nona is a damn cool protagonist. A young girl who can almost kill a gigantic, strong, powerful man? Who was sold by her own mother because the child was too violent? Well, sign me up to read more about her! Grimdark has offered more than its share of multi-layered shades-of-gray characters in the last decade or so, but a little girl like Nona is still a refreshing change to what I’ve read before.

In fact, figuring out just who Nona is, what her powers are, why her mother sold her off so easily, is part of the intrigue of Red Sister. The main part of the novel is about Nona’s training at Sweet Mercy and the friends (and enemies) she makes there, at least until somewhere around the halfway mark. Then a sort of threat is introduced and Nona and her friends have something to fight and something to protect. Plot-wise, it felt rather cheap to me, like a late addition because someone (author/editor?) noticed there should be a plot string that can be resolved in the first book. But despite its late introduction, it was thrilling to follow. And the book does have an overarching story as well – namely that of Nona’s almost-but-not-quite-victim who is now out for revenge.

My rating is very much due to expectations vs. reality. If I had gone into this without having read so many overwhelmingly positive reviews, my experience could have been very different. But because so many people spoke so very highly of this series, I had expectations of mind-blowing world building, cool action, and great character work. All of those things are there to some degree, but none of them really blew my mind or did anything new that hasn’t been done in the genre before.

The idea of what comes down to superpowers is not new. There used to be four original tribes whose bloodline is now diluted and only shows up – to varying degrees – in a few people. Depending on which tribe’s blood they have, they get either super speed, extreme strength, etc. On rare occasions, people are born with more than one of those traits and there is a prophecy (of course!) of a Chosen One who is supposed to have traits of all four bloodlines. Now it may be refreshing that protagonist Nona is not that Chosen One and that is made clear very early on, but other than that, it’s pretty standard fantasy fare.

The same goes for the catchy but ultimately irrelevant pitch of “assassin nuns”. The sisters of Sweet Mercy may be called nuns but what they really do is running a magic school. There are classes on poisoning, swordfighting, classes that help you use your magic, and so on. Because I happen to enjoy the trope of magic school, this was actually a lot of fun to read about. It’s definitely not the Harry Potter kind of school. There is no whimsy, everything is super dark and mysterious, but I enjoyed the ideas and the way Nona and her friends grew throughout their time at Sweet Mercy.

One of the most interesting and original things was probably the world building. The four tribes, whose blood gives people the aforementioned superpowers, landed a long time ago on Abeth. Abeth appears to be a planet that is only habitable on a thin strip – the planet’s equator. Everywhere else is ice and cold and death. And even the places where people can currently live are doomed because the sun is dying. That is such a cool idea that mixes science fiction with fantasy. I suspect that’s the big that Mark Lawrence saved up for the rest of the trilogy because while we get glimpses of this world and what may have come before, how it may all have come to exist the way it does, we never go into any depth. If I continue reading the trilogy, it will be to find out more! This is the one thing that I found really original.

So now I’ve ranted again and made it sound like this book isn’t good. That’s totally not the case! I enjoyed it a great deal, apart from the middle bit where it wasn’t sure where it wanted to go. Nona is a cool character to follow because she seems both ice cold murderer and true loyal friend and she doesn’t have the easiest time dealing with her past. The side characters sadly weren’t very interesting. None of them really stood out, not the friends, not the teachers, not even the villains. They do their job within the plot and they do it well but as for grimdark characters, I’d much prefer Joe Abercrombie or George R.R. Martin’s take on them. I won’t know until some time has passed but I susped that I will have forgotten most of the characters here within a couple of weeks.

I have reached the end of my ramblings and I still don’t quite know how to rate this book. It was an okay story with okay characters plus one truly great character. It had generic fantasy tropes but with a cool science fictional setting. The action scenes were well-written and kept me intrigued but I felt like the author was holding back on purpose to stretch out the ideas over three books. Maybe I’ll continue the trilogy one day, maybe I won’t. But one thing is for sure – this book was not good enough for me to immediately pick up the sequel.

2 thoughts on “Cool but Not as Cool as Expected: Mark Lawrence – Red Sister”