I’d been looking forward to reading the next book in McGuire’s October Daye series but after this, I think I’ve had my share of McGuire books for the year. Toby Daye can wait until 2021 because I have McGuire burnout!
The only (!) reason I picked up this book with the horrible cover, the generic title, and the boring premise is because the series is nominated for a Best Series Hugo Award and I want to give everything a chance. McGuire has surprised me in the past, even within the same series (Wayward Children, I’m looking at you) so I jumped over my shadow and gave this a fair shot. Things did not go well… 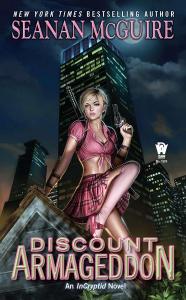 Opening line: Verity danced circles around the living room, her amateurish pirouettes and unsteady leaps accompanied by cheers and exultations from the horde of Aeslin mice perched on the back of the couch.

Cryptid, noun: Any creature whose existence has not yet been proven by science. See also “Monster.”
Crytozoologist, noun: Any person who thinks hunting for cryptids is a good idea. See also “idiot.”

Ghoulies. Ghosties. Long-legged beasties. Things that go bump in the night…
The Price family has spent generations studying the monsters of the world, working to protect them from humanity—and humanity from them.
Enter Verity Price. Despite being trained from birth as a cryptozoologist, she’d rather dance a tango than tangle with a demon, and is spending a year in Manhattan while she pursues her career in professional ballroom dance. Sounds pretty simple, right?
It would be, if it weren’t for the talking mice, the telepathic mathematicians, the asbestos supermodels, and the trained monster-hunter sent by the Price family’s old enemies, the Covenant of St. George. When a Price girl meets a Covenant boy, high stakes, high heels, and a lot of collateral damage are almost guaranteed.
To complicate matters further, local cryptids are disappearing, strange lizard-men are appearing in the sewers, and someone’s spreading rumors about a dragon sleeping underneath the city…

I don’t usually write reviews about books I didn’t finish because… well, I can’t judge the whole book when I’ve only read a part of it. But I can judge the bits I’ve read. In this case, they were not good. Actually, they were pretty terrible. We follow Verity Price’s first person narration as she lives in New York where she works with cryptids – supernatural beings – and protects them, but also makes sure that the wilder ones among them don’t start eating people. Otherwise, it’s exile or, you know, death. I have read 34% of this book (so sayeth my Kobo) and I could not bear a single page more. Let me elaborate.

Verity Price is good at everything. Scratch that – she’s perfect at everything. Blonde, lithe-bodied, athletic, and of course super smart. She’s everything I hate in a protagonist. Through rigorous training – NOT superpowers or magic or something else more believable – she is basically a pro in a dozen martial arts, knows how to use all sorts of weapons, she free runs through New York City, and generally just excels at everything she touches. Oh yeah, she’s also really into ballroom dancing, a fact with which she keeps bombarding the reader in every paragraph. That’s all we learn during the first five chapters or so, so this book was off to a very bad start.
I want my heroines flawed and if they have to be really good at something, at least give them something else that they sucks at. Or if the protagonist has to be supernaturally amazing at everything, give me an explanation that is somewhat believable. Even a handwavey explanation would have helped. But, alas, we are supposed to believe that one person can be this great just because she applied herself. Way to go for creating unrealistic expectations of women.

I’m probably one of the few people in the world who doesn’t have a problem showering while standing on one leg and pointing the toes of my other leg toward the ceiling.

Oh yes, Verity, you are so super special. But I’ll let you in on a secret. Even without a super special and unrealistic ballroom career next to your other job of full-time monster protecting, there are people who can do the splits… I’m one of them. We’re not that special. Being flexible shouldn’t be anyone’s best (or only) quality.

So what’s this mess of a novel even about? The Price family used to work with an organization called the Covenant – essentially a monster-hunting secret society that has sworn to find and kill all the cryptids living on Earth. Except the Prices realized that not all monsters are bad, some just want to live their life in peace and don’t eat people on a regular basis. So why not coexist? They left the Covenant and have been in hiding ever since. That’s important for the plot, which takes a whopping 15% of the book to even show the slightest hint of starting (but, spoiler, doesn’t even really start until 31%).
Because when Verity encounters an agent of the Covenant, she just straight up tells him who she is, that her family is alive and well, and then she lets him go… Remember, this is the super smart protagonist who paints herself as Miss Perfect and sleeps cuddling her many, many guns. I cannot BEAR stupid protagonists, especially when that supidity stands in stark contrast to what we’ve been told about them. There was absolutely no reason for Verity to tell that guy who she was. She just did it. Her explanation afterwards? She lost her temper. Which wasn’t there on the page at all. In fact, because she’s such an uber-badass, she remained pretty calm during the entire encounter. And then she proceded to spill her family’s secret. Because reasons, I guess.

“Hi,” I said brightly. “Ever been shot in the head? Because I don’t think you’d enjoy it much. Most people don’t.”

What little dialogue there is, was super cringe-worthy. It’s like Seanan McGuire tried to write her own Buffy (without the superpowers that give Buffy all her strength etc.) but couldn’t reach anywhere near Joss Whedon’s witty dialogue and snappy one liners.

The actual plot – cryptids gong missing and a certain creature existint that people thought didn’t exist  – only begins at about 31%. That means you get over 100 pages of info dumping, repetitions about how wonderful Verity is and how she is great at everything, ESPECIALLY BALLROOM DANCING!
At that point, I decided I would give the book a limited number of pages to get me hooked and if it failed, I’d just DNF it. The more I read, the more annoyed I got. Because apart from the really dumb protagonist who we are repeatedly told is amazing, the pacing and plot are also really bad. If nothing of interest to the story happens during the first 100 pages, something went wrong during the editing stage. It’s great that we get to learn about all these cryptids and their quirks but I didn’t pick this up because I wanted a list of supernatural beings. I want plot and interesting characters. That’s not too much to ask, is it?
And when we’re not getting endless paragraphs about the make up habits of gorgons, we instead have to work several pages filled with the rules of ballroom competitions. And of course many mentions of Verity’s brilliance and awesomeness and general perfection.

Side note: I did a search on my Kobo and the word “dance” appears 145 times in this book. “Ballroom” is only used 30 times. But you get the picture. Verity doesn’t actually do much ballroom dancing, she just likes to let us know in every paragraph that she’s great at it.

Another thing that didn’t help was the humor. It may very well work for you – we all know humor is absolutely divisive and something one person hates can make another one giggle for hours. Generally, I do like Seanan McGuire’s humor, especially in interviews (her personal, real sense of humor works for me and I usually laugh at her jokes) but I was disappointed that, apparently, that’s the only type we ever get from her. The October Daye series – which I’ve started last year and enjoy a lot – doesn’t try as hard to be funny but Toby also likes being a bit snarky at times. Verity, however, lays it on pretty thick. Her “funny” one-liners left me frowning rather than smiling, her oh-so-clever descriptions of cryptid species all sound the same. I wish that these two urban fantasy series did more to stand apart when it comes to writing style as well as characters/plot.

The part where I finally decided I’d had enough was when Verity, out of nowhere, kisses a guy she had previously shown no interest in kissing. But of course, the only human male that we’ve met so far has to be the love interest because them’s the rules, I guess.

I know that this series, as well as McGuire’s other books and series, has quite a fan following and I wish I could have joined them. But to me, this felt like a carelessly thrown together mess without a point. If you’ve finished this book or even read more of this series, please let me know in the comments if things get better. At this moment I have no desire of ever touching another InCryptid novel, but who knows what the future might bring.

MY RATING: Did Not Finish (but I’d give the first third of this book 2/10)