It doesn’t happen often that an author makes my opinion change 180 degrees. Laini Taylor did it! I first read Daughter of Smoke and Bone a while ago and bounced off it hard. Then, however, I read Strange the Dreamer and fell so utterly in love that a second chance was in order. My second read of the trilogy opener ended up much more positive. So much so that I ordered the pretty expensive Illumicrate special edition hardback. And while I’m saving Muse of Nightmares, I just had to know how Karou’s story continued. SPOILERS FOR DAUGHTER OF SMOKE AND BONE BELOW! 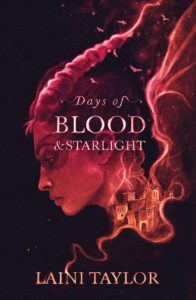 DAYS OF BLOOD AND STARLIGHT
by Laini Taylor

Opening line: Prague, early May. The sky weighed gray over fairy-tale rooftops, and all the world was watching.

Once upon a time, an angel and a devil fell in love and dared to imagine a world free of bloodshed and war.
This is not that world.
Art student and monster’s apprentice Karou finally has the answers she has always sought. She knows who she is—and what she is. But with this knowledge comes another truth she would give anything to undo: She loved the enemy and he betrayed her, and a world suffered for it.
In this stunning sequel to the highly acclaimed Daughter of Smoke & Bone, Karou must decide how far she’ll go to avenge her people. Filled with heartbreak and beauty, secrets and impossible choices, Days of Blood & Starlight finds Karou and Akiva on opposing sides as an age-old war stirs back to life.
While Karou and her allies build a monstrous army in a land of dust and starlight, Akiva wages a different sort of battle: a battle for redemption. For hope.
But can any hope be salvaged from the ashes of their broken dream?

This book picks up almost seamlessly from where the last one ended and it begins both in the best of ways and the most agonizing of ways. I love that the opening chapter is from the point of view of Zuzana, Karou’s best friend from art school. She not only brings a lot of humor into an otherwise very dark story, but she also puts the girls’ friendship front and center. Do I even need to mention how much I love seeing great female friendships in fiction? Where one girl can appreciate that the other is ridiculously beautiful without being jealous? Where they have each other’s backs, no matter what? Yeah, Zuzana and Karou are like that and this middle volume puts more focus on that friendship than the first one did.
The reason the beginning was also terrible (in a good way because it hits you right in the feels) was that it takes a long time for us to actually catch up to Karou. We see what Akiva has been up to, we meet some new chimaera characters, and that’s all good and interesting, BUT WHAT ABOUT KAROU?? Until, of course, we do see what she’s been doing and, more importantly, how she’s been doing.

Laini Taylor may write about Chimaera and Seraphim, creatures that aren’t real, that are considered fantasy, but this novel is really about war where it doesn’t matter what side you’re on or whether any of the people involved are actually human. Karou hasn’t been idle since Zuzana and Mik watched her fly away into the sky but she also hasn’t been well. When we meet her again, she is broken, torn between her two lives and numbed by the grief of having lost her closest family. And then there’s the war…

This book takes a little longer to get going because it spends a lot of its first half introducing secondary characters, sometimes even very minor characters, to give the world more depth. I loved those parts but I’m sure some readers will be put off by the lack of focus on Karou. I found it interesting (and at times heartbreaking) to get to know random Chimaera characters who are currently in Eretz, fleeing from the angels that are trying to slaughter their entire species. I also loved seeing from the eyes of Seraphim guardsmen who aren’t participating in the war by hunting and killing Chimaera civilians, but whose job it is to protect emperor Joram. Their perspective is vastly different than Akiva’s for example, and even though some of those side characters only show up for a chapter or three, they helped make this world feel more real and more lived-in. And they gave me, as the reader, hope for a future peace. Not everyone is on board with what their leaders are telling them. They comply out of fear or because they think they are alone. Then again, some characters are just utterly vile and we get to see them as well, adding to the darkness of this novel.

There is little advancement in plot for a long time but during the second half of the book, things go absolutely crazy. Not only are old secrets revealed and new alliances forged, but both Karou and Akiva go through extremely tough situations that will leave them changed for the rest of their lives. The ending managed to straddle that line between being a satisfying conclusion to this volume but leaving many, many things open to be resolved in the final instalment.

There were a few things about this book that made it stand out to me. One quote – which I can’t tell you without spoiling, so I’ll be super vague – even brought tears to my eyes. I can sort of describe why, though. What Laini Taylor sets up during the beginning of this book is an atmosphere of utter despair. We see both sides of this useless war doing unspeakable things to each other and neither side can see any way out of it. Too much has happened in the past, to many deaths, too much suppression, how is this ever supposed to end unless one side completely annihilates the other? In the middle of this depressing world are Akiva and Karou, both sort of helping “their side” in the war effort but neither of them wants the killing to continue. But what can two lonely people do against the Warlord’s ruthless son and the Seraphim emperor who is determined to eradicate all Chimaera?

When you’re right in there with Karou and Akiva, when you feel there’s no hope for this story to ever reach a resemblance of a happy ending, Laini Taylor gives you glimpses of light. And it was those moments – whichever form they came in – that made this book have such an impact on me. Whether it’s a side character who refuses orders because killing children is not something they want to do, even if it’s “the only way” to save their people; or someone you thought you couldn’t trust who turns out to be on your side after all, or whether it’s just Zuzana and Mik being Zuzana and Mik and showing everyone that there’s more to life than blood and battle – I loved these moments and they gave me, reading this, the same feeling that the characters in the story got and which is also the book’s central theme: hope!

If I wasn’t in the middle of a readathon with a nicely planned TBR, I would have started the third book right away. I may just make Dreams of Gods and Monsters my next audiobook just so I can get to it in August. By now, after the rollercoaster of emotions that has been me discovering Laini Taylor’s writing, I have high expectations and I’m pretty sure I’ll be a sobbing mess by the end of this trilogy.

Look at these gorgeous anniversary editions!!! There will be a paperback re-release of the trilogy (third cover to be revealed) but as I mentioned above, I splurged and orderd the signed hardback edition from Illumicrate and I fully intend to get the matching hardbacks for the rest of the trilogy.

These stunning covers are done by Jim di Bartolo (Laini Taylor’s husband) and I just love all the little details. Brimstone’s face on the first cover with a tiny Karou looking up at him just says so much. And then you have (I assume) Prague hidden in the smoky blue lines.
On the second cover, it took me a while to notice that the fiery smoke behind Madrigal (I guess it’s Madrigal) is in the shape of wings which also fits the book perfectly! I have no idea what to expect from book 3 as I haven’t read it yet but I cannot wait for both the content and the new cover of that book. It’s been a while since I was this excited! 🙂

4 thoughts on “War Between Angels and Monsters: Laini Taylor – Days of Blood and Starlight”