Life has been a bit stressful lately, so I haven’t posted as much as I would have liked. But I’m still reading and catching up on 2020 releases, so you can expect new reviews soon. Pinkie promise!

Until then, I thought I’d participate in this week’s Top Ten Tuesday, which is all about bookish quotes. I dove deep into my reading history and, unsurprisingly, ended up with quotes from my favorite books and authors.

Because Laini Taylor is a genius and Strange the Dreamer is full of beautiful quotes, I cheated and chose two:

“You’re a storyteller. Dream up something wild and improbable,” she pleaded. “Something beautiful and full of monsters.”

– Strange the Dreamer by Laini Taylor

It comes as no surprise that my very favorite author is featured on this list. She may make more than one appearance… Catherynne M. Valente’s Deathless broke my heart in so many ways, it’s ridiculous. And while there are many lines in that book that I can re-read over and over again without them losing their power, here’s my favorites:

“You will always fall in love, and it will always be like having your throat cut, just that fast.”

And I have to add another Laini Taylor book. Her collection of shorter works Lips Touch: Three Times is the reason I gave this author another chance when I bounced off another of her books hard. I’m so glad I tried again because now she’s one of my favorites. 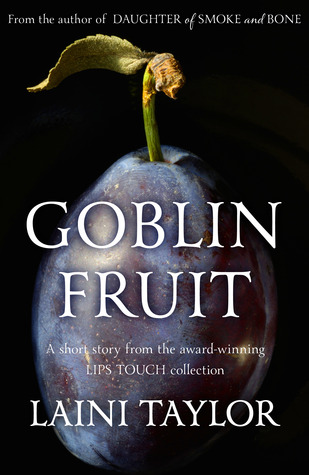 “There is a certain kind of girl the goblins crave. You could walk across a high school campus and point them out: not her, not her, her. The pert, lovely ones with butterfly tattoos in secret places, sitting on their boyfriends’ laps? No, not them. The girls watching the lovely ones sitting on their boyfriends’ laps? Yes.
Them.
The goblins want girls who dream so hard about being pretty their yearning leaves a palpable trail, a scent goblins can follow like sharks on a soft bloom of blood. The girls with hungry eyes who pray each night to wake up as someone else. Urgent, unkissed, wishful girls.”

So, every single one of the five volumes in the Fairyland Series is filled to the brim with quotable lines. I have chosen only a few to give you a taste. If you haven’t yet, go try and read The Girl Who Circumnavigated Fairyland in a Ship of Her Own Making and then devour the rest of the series because it is filled with the kind of wonder you last felt as a kid, plus Cat Valente’s trademark lyrical prose.

“A silent Library is a sad Library. A Library without patrons on whom to pile books and tales and knowing and magazines full of up-to-the-minute politickal fashions and atlases and plays in pentameter! A Library should be full of exclamations! Shouts of delight and horror as the wonders of the world are discovered or the lies of the heavens uncovered or the wild adventures of devil-knows-who sent romping out of the pages. A Library should be full of now-just-a-minutes and that-can’t-be-rights and scientifick folk running skelter to prove somebody wrong. It should positively vibrate with laughing at comedies and sobbing at tragedies, it should echo with gasps as decent ladies glimpse indecent things and indecent ladies stumble upon secret and scandalous decencies! A Library should not shush; it should roar!”

– The Girl Who Soared Over Fairyland and Cut the Moon in Two by Catherynne M. Valente

– The Girl Who Fell Beneath Fairyland and Led the Revels There by Catherynne M. Valente

And another infinitely quotable writer appears on this list. Terry Pratchett was a treasure and a fountain of insight into human nature. The fact that he holds up a mirror to our society with humor only makes his books better! Reaper Man is one of his books that touched me particularly because even though Death takes a vacation in this story, his job is never really done, is it?

THEODORA GOSS – IN THE FOREST OF FORGETTING

I discovered Theodora Goss via Cat Valente because they both write mythpunk. The short story collection In the Forest of Forgetting blew me away with its imaginative stories, deep themes, and of course, beautiful quotes.

“This is the sort of thing people like: the implication that, despite their minivans and microwaves, if they found the door in the wall, they too could enter fairyland.”

– Pip and the Fairies by Theodora Goss

Maggie Stiefvater is one of those author who can pull you into a story that you follow along nicely, and then she hits you with a line so perfect it’s like a punch in the guts. But, you know, in a good way. I urge you to read her entire Raven Cycle, and then throw in the Scorpio Races and have your heart torn out. Because why should it just be me. I would have added my favorite quote from that book as well but it’s the very last line and I don’t want to spoil it for you.

“Gansey had once told Adam that he was afraid most people didn’t know how to handle Ronan. What he meant by this was that he was worried that one day someone would fall on Ronan and cut themselves.”

– The Raven Boys by Maggie Stiefvater

Come on, let me have another Pratchett quote! This is a non-Discworld novel so if academic wizards, headology-using witches, or cynical city guards aren’t for you, pick this one up. Nation has so many layers and all of them are beautiful. Ever since I read it, I’ve been giving this book as a gift to everyone I could think of.

“Someone had to eat the first oyster, you know.
Someone looked at a half shell full of snot and was brave.”

“Take one strip of the vine lengthwise and yes, it needs the strength of two men to pull it apart. But weave five strands of it into a rope and a hundred men can’t break it. The more they pull, the more it binds together and the stronger it becomes. That is the Nation.”

This criminally underread trilogy is such a gem! Flora Segunda, Flora’s Dare, and Flora’s Fury are the kind of books that make you feel like coming home after a long trip. You fall into this world’s alternate Calfornia and follow young Flora and her best friend Udo on crazy adventures. There’s twists and turns and quite a few emotional moments. Wilce’s use of language is quite brilliant and sets this series apart from other Middle Grade/YA tales.

“I lit the lantern, ate a bar of chocolate, put on dry socks, and felt much better. You’d be amazed, said Nini Mo, how much dry socks matter.”

This was one of those surprise books that I didn’t expect too much of and then it swept me away with its prose, its intricate characters, and the story it tells. Putting it on this list makes me want to re-read it immediately. Mechanique was so good, you guys! And it didn’t get nearly the attention it should have.

One day the wolf was wild enough to run into the forest near their camp, hunting something only it could sense. A week later when they pulled down the tent, the wolf had not come back. “Call it, if you want,” Boss told Jonah. “We’ll wait.”
That night Jonah stood for an hour at the edge of the camp, looking into the darkness of the woods. He came back empty-handed.
Ayar frowned. “It didn’t come?”
Jonah said, “I didn’t call.”