Why is it that negative reviews are so much easier to write than positive ones? I guess I’ve spoiled my own review now but yes, you can expect some ranting, lots of head shaking and bafflement at how this got published and marketed the way it was. Even if it’s not all bad, it is, unfortunately, mostly bad. The hype monster has struck again… 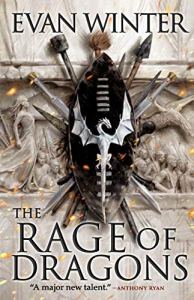 THE RAGE OF DRAGONS
by Evan Winter

Opening line: Queen Taifa stood at the bow o Targon, her beached warship, and looked out at the massacre on the sands.

The Omehi people have been fighting an unwinnable fight for almost two hundred years. Their society has been built around war and only war. The lucky ones are born gifted. One in every two thousand women has the power to call down dragons. One in every hundred men is able to magically transform himself into a bigger, stronger, faster killing machine.

Everyone else is fodder, destined to fight and die in the endless war. Young, gift-less Tau knows all this, but he has a plan of escape. He’s going to get himself injured, get out early, and settle down to marriage, children, and land. Only, he doesn’t get the chance. Those closest to him are brutally murdered, and his grief swiftly turns to anger. Fixated on revenge, Tau dedicates himself to an unthinkable path. He’ll become the greatest swordsman to ever live, a man willing to die a hundred thousand times for the chance to kill the three who betrayed him.

This book has many, many problems but the beginning isn’t one of them. In fact, the prologue is quite interesting. A fleeing people is looking for a new home and decides to settle on a peninsula by driving the natives away. So far, so questionable but also quite intriguing. Many years later, Tau is a young man of these people called the Omehi. They live by a strict caste system and their entire lives revolve aruond war – mainly the war fought against the natives who would like their land back, please. Every man has to join the military but Tau has other plans. He dreams of a quiet life with Zuri, the girl he loves. That is, until his father is killed by a Noble. Thus starts Tau’s revenge quest, complete with a kill list like Arya Stark’s (although with fewer people on it).

So Tau joins the military and then comes 400 pages’ worth of training, fighting, battles, melees, duels, and all other types of sword fight you can think of. I’m not exaggerating. It’s all fights, all the time. There is very little plot in this chonker of a novel and also – to my great surprise – very few dragons. We see dragons in the prologue and then again quite late into the book. And when they do show up, the dragons are… kind of lame? I’m not a dragon fanatic and I honestly wouldn’t have minded their absence but if you title your book The Rage of Dragons, that raises certain expectations which were certainly not met.

Another large problem was the world building which, again, ties to the marketing of the book. It is sold as “Game of Thrones meets Gladiator in an African-inspired world”. I mean, what’s not to like about that? You’d expect political intrigue, factions conniving against each other, backstabbing, epic battles, and an African-inspired setting and culture, right? What you get is… none of that. The world could be any world, really, as the only African-inspired thing in this book is the characters’ names and titles. There is no culture, no descriptions of landscapes, no folklore – in short, nothing that sets this apart from any other military fantasy in a world with dragons. It also has none of the emotional impact the movie Gladiator has and absolutely no political intrigue because there’s not even a proper political system set up to play around with.

By far the worst thing was the long, boring stretch in the middle – and I’m using the word “middle” generously here, it’s really everything except for a couple of chapters at the beginning and the end – which consists entirely of fight scenes. Now these were written well enough but once you’ve read about seven duels or training battles, you kind of get the idea.
There is one moment that got me interested again, somewhere in the middle of this book. The magic system, which is also rudimentary at best, uses trips to the underworld as a source of power. The Gifted, the only females who appear in this book (a lot more on that later), can send their spirit, and the spirits of the men, into the underworld to either give them superstrenght, confuse them, or draw magic power from this place to summon and control dragons. In this underworld, hordes of demons attack you (or rather your spirit) and cause you immense pain. That was one of the few things that I found really cool, especially because Tau uses this knowledge in interesting ways.

Which leads me to the character of Tau and the way information is conveyed in this book. Tau is an idiot.

There was amazing potential at the beginning and so many cool themes that could have been explored. Tau’s relationship with his best friend Jabari who is his superior in caste comes into question right at the start when Jabari doesn’t stand up for Tau although a friend really should have. I had hoped we’d see this betrayal lead to something but the truth is, late in the book Jabari shows up again and although Tau is a bit grumpy, it’s like nothing ever happened between them. The same goes for the very basis  of this story – the war between the Omehi and the native Xideen. The Omehi are essentially stealing the natives’ land and then killing them for trying to get it back. I mean it doesn’t take a genius to see that our protagonist is not on the right side of this war. The Omehi had to flee their own home, so it’s understandable that they are desperate and just want a place to settle down. Wouldn’t it have been so amazing if this conflict had been discussed in any meaningful way? Yes, yes it would. Unfortunately, Evan Winter spent the entire novel telling us about Tao’s growing skills with a sword and just how much he wants the people dead who killed his father. Seriously, he does not let you forget!

Although both world building and magic system remain superficion throughout the entire story, there are little tidbits here and there that give us a slightly better picture of How Things Work. Some of them are presented as plot twists (those only really work when you’re emotionally invested, so they fell flat for me) and sadly, all of the information Tao learns over the course of this story is simply given to him by people much smarter and more interesting than him. Zuri, Tao’s Gifted girlfriend, is the one who shows up after ten battles to tell Tao something she has figured out. It is her who pieces everything together and it is her who questions how their society works. Her character would have made such a great protagonist, but sadly she exists solely to give Tao information and be his object of lust. The one sex scene was rather cringe-worthy.

The Omehi may be ruled by a queen but there is only one proper female character in this entire book – Zuri. The Queen gets to speak a little bit, one or two other women are mentioned but usually only as their function: the Gifted who fights with Tao’s team during battle training, that  other Gifted who dies on the battlefield, Tao’s team leader’s daughter… They don’t get a presonality, they certainly don’t get agency, and most of them don’t even get a name. I am baffled that in 2019, a fantasy novel like this can be published and receive mostly positive reviews. Is it me? I’m not usually one who counts female characters and looks at ratios so when I notice a lack of women in a book, it means there’s really something wrong!

So most of the cast is male, which doesn’t keep them from being absolutely flat, just like Tao himself. His only driving force is revenge. Others at least show signs of seeing the bigger picture. They want betterment for their fellow people in the lower castes, yet even when they tell Tao that their Scale (their team) has a chance to show the world that Lowers are just as worthy as Nobles, Tao remains selfish and stubborn and doesn’t really care about the men who consider him a friend. There’s really not much to like about him.

The audiobook is narrated by Prentice Onayemi, who not only has the most soothing voice I can think of but also does his best to keep the listener engaged, despite the endless repetition of fight scene upon fight scene. I wasn’t a big fan of the way he read female characters but as mentioned above, there are only two who get to speak anyway, so that wasn’t a big problem. I didn’t enjoy this book but the audiobook definitely made me interested in more books read by Onayemi. It’s not his fault, after all, that he had so little to work with.

One last thing about the ending: What little plot there is doesn’t even get resolved by the end. Tao does have a moment of character growth which felt like it came out of nowhere because he previously refused to vehemently to behaving like a decent human being. But the actual plot – Tao’s revenge quest – is left mostly open. It came as no surpise to me that the larger story about the war also leads nowhere because this book is a series starter. And since I didn’t care about any of the characters except for Zuri, I wasn’t a fan of the ending either. That little last-minute conflict that was thrown in had no impact because we weren’t even properly introduced to the characters involved to care about who betrayed whom and why and what consequences this would have for the Omehi as a people. It felt quickly thrown together so the story could reach some sort of conclusion, not an organic ending at all.

Okay, I thought I was done but there’s more. Even with the terrible characters, the lack of women and plot, the shoddy world building and the messed-up ending, one thing could have saved this novel at least a little, and that is writing style. Winter definitely loves writing fight scenes and some of them were exciting enough. But other than that, he does a lot of telling instead of showing (mostly via Zuri because Tao doesn’t think for himself) and the prose in general is quite simple. I’d say a professional author (or his copy editor) should know the difference between “hanged” and “hung” and manage to describe more of the world than swords and demons, but maybe that’s just me.

Needless to say, I  won’t continue this series. I picked up this book because it sounded good and because I am trying to discover more new-to-me Black  writers. If you’re looking for that African-inspired GoT, look elsewhere. If you like reading about men bashing each other over the head with swords A LOT, then why not give this book a try? It certainly has found its audience and even though I’m not among them, I wish Evan Winter all the best in his writing career.

2 thoughts on “Evan Winter – The Rage of Dragons”