Last year, I decided to catch up on some classic SFF that I hadn’t read yet because it’s so easy to get swept away by new publications. I started Susan Cooper’s The Dark is Rising Sequence and I found the first book quite nice. Not groundbreaking, but fun enough. The second book is a Newberry Medal winner and appears on all the lists of best fantasy ever so I had high expectations. Having read it, I honestly don’t know if me and all those other people have read the same book.

THE DARK IS RISING
by Susan Cooper

Opening line: ‘Too many!’ James shouted, and slammed the door behind him.

This night will be bad and tomorrow will be beyond imagining.

It’s Midwinter’s Eve, the day before Will’s eleventh birthday. But there is an atmosphere of fear in the familiar countryside around him. This will be a birthday like no other. Will discovers that he has the power of the Old Ones, and that he must embark on a quest to vanquish the terrifyingly evil magic of the Dark.

Will Stanton is turning eleven just a few days before Christmas and strange things are happening. Birds behave weirdly, his wish for snow seems to be coming true, even though snow doesn’t usually stick around in his home town, and a homeless man appears to be following him around.
It doesn’t take long for Will (and us readers) to find out that Will is an Old One, a person involved in the epic battle between the Light and the Dark. No further details are given because I guess labeling things “good” and “evil” is enough. Will meets Merriman – whom we know from the first book – and is taught a little bit of the awesome powers he now possesses, such as making a fire out of nothing or talking with other Old Ones telepathically. Merrimen does not, however, tell Will not to use those powers because it draws the attention of the Dark… Which just seems like a cruel joke, considering any 11-year-old with the sudden power to make a fire would immediately try that power on his way home through the snow.
So Will does, gets into danger, and gets saved by Merriman who then gives  this vital bit of information to Will. And sadly, that whole introductory part of the book tells you exactly how the rest of it will go.

Will is the Sign-Seeker and he is entrusted with a quest by Merriman and the Lady and some other Old Ones, who happen to be Will’s neighbours. Six signs, shaped like a circle with a cross in the middle have to be found and put together. Again, that’s all they tell the boy. No clue as to where to start, what to do, who to talk to, how to use his powers to help him on this quest… not even any information on why the signs are important or what this battle between Light and Dark is all about. Nothing in this book is ever properly explained and therefore, nothing really makes sense. There are these signs and they get cold when evil is around and Will has to protect them somehow? He also gets this ancient book to read which conveniently pours all the knowledge he nees magically into his brain (forgetting that some of it might be interesting to the readers as well) but which doesn’t change anything about Will’s behaviour, powers, or the way he continues on his quest. 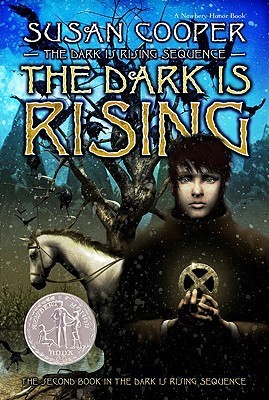 uest: it may say that Will has to “seek” these magical signs but Will  doesn’t actually do anything in this entire book. Will comes across people who either straight up give him one of the signs or at least tell him exactly what to do to get to it. Will gets in danger occasionaly but those scenes also fell flat because he is immediately rescued by a convenient other Old One (they pop out of the ground whenever the plot requires it). So any tension there might have been is taken out by the author. Will is the most passive protagonist I’ve read in a long time and I don’t see why I should like him. There’s nothing about him to like (or dislike, for that matter). He is just a blank human-shaped something that does what he’s told by complete strangers who say they are the Light and he’s one of them and then he collects signs on his belt and hopes someone will save his ass when the Dark gets too close to him. Let me tell you, this was the opposite of engaging and exciting.

The part I enjoyed the most was actually the non-fantasy aspects. Will’s family is huge and while I have no idea which of the 12 siblings is which I really loved reading about their Christmas excitement, their childish banter, their joy at opening presents and so on. They go carol singing at one point and although there’s really nothing all that special about that part, I found myself enjoying the book way more than during any of the epic blahblah that was happening in between. Again, twelve siblings is a lot and most of them didn’t even get to speak, but the ones that do even felt like real characters with a distinct personality. Chatterbox Mary or calm and reliable Paul come to mind. They felt way more alive than Will ever did.

So to sum it all up, this book has three gigantic problems: a passive protagonist, no world building whatsoever, a thin plot without any real stakes.
What worked was the writing itself. I found the prose quite nice and it built up a great atmosphere of this wintery landscape and of Will jumping around in time – oh yeah, the Old Ones can just go through time somehow but don’t ask me how because with one exception where they go through an actual door, nobody explains how this works or if Will could do it by himself or whatever.
The whole quest never feels like a quest because Will just goes about his everyday life, doing whatever he would be doing anyway and then suddenly magic happens to him and one of the Old Ones is there and hands him a sign or tells him how to get it. He goes and gets it and we’re back to regular life until the whole thing starts over again until finally, all six signs are collected and can be united. Because reasons.

When I had finally reached the end of this tedious repetitive bore of a book, I felt quite cheated because there wasn’t even a big epic fight at the end. Sure, Will faces the Rider (kind of the boss of the Dark, at least in this book) and for the first time has to make a decision on his own, but then – conveniently as everything in this story – things just fall into place and Will can go back to doing whatever he was doing before. Merrimen and the Lady – whoever the hell she really is – conclude that now another one of the four big objects has been restored. The first one was the Grail from the first book which means two more are coming. So I guess that means two more books with “quests” and then, finally, the showdown between the Light and the Dark?

Look, I enjoyed the first book well enough but I would have just let it stand on its own if this series wasn’t hyped as such a classic of children’s literature, mentioned in the same breath with Narnia. If this second volume is any indication of how the series will continue, I’ll just call it quits here and go back to those new releases where plot and character and world building actually matter.

4 thoughts on “Apparently, This is a Classic: Susan Cooper – The Dark Is Rising”