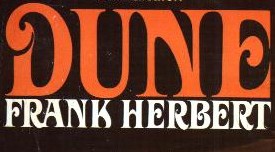 This is one of those books that, once you put them down, grow on you more and more. While I didn’t enjoy all of it while I was actually reading it, my memories of the story seem to grow fonder all the time. Sounds weird? I agree. Be that as it may, the story of the desert planet Arrakis is well worth your time, especially if you’re delving into the realms of science fiction. 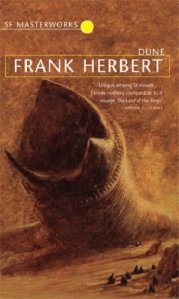 First sentence: In the week before their departure to Arrakis, when all the final scurrying about had reached a nearly unbearable frenzy, an old crone came to visit the mother of the boy, Paul.

Duke Leto Atreides and his house move to the planet Arrakis, the only planet that produces the geriatric spice melange. This substance is worth more than anything else in the universe, the space guild needs it to navigate through space, whole populations are addicted to it. But once they arrive on Arrakis, called Dune, the Atreides family – Duke Leto, his consort Lady Jessica and their son Paul – find themselves the center of political intrigue that threatens the balance of the universe…

It took me a long time to get into this story. The beginning is very slow, there is hardly any explanation as to who is who and I’m no fan of the writing style. Once the plot kicks off, though, I was in it for good or bad. The second half of the book is a fast-paced thrill ride and Paul became one of the coolest characters I’d ever read about.

The characters, while sometimes quite bluntly introduced, were all very vivid to me. Side characters (watch out for them, some of them might come back later) as well as protagonists and even people that never actually show up but are only talked about each have their own personality and their own agenda. This brings an awesome dynamic into the story and is probably one of the reasons why the book is so slow to begin.

Frank Herbert has created an amazing world with Dune. While it is a planet that consists of only desert, the indigenous people, the Fremen, manage to live on it without too much trouble. Their culture is believable and seems to have grown out of the planet they inhabit. For them, spice may be a valuable substance, but the true luxury is water. The whole Fremen lifestyle evolves around the conservation of water and as Paul is slowly learning their ways, my eyes were absolutely glued to the pages. Wow!

Now my big pet peeve with this science fiction classic: I hate the writing style. Herbert does what I’m told is called mind-hopping. Which means that in any given scene, the narrator can see into any character’s head. And does. That as such is not a bad thing – it’s hard to pull off without confusing your readers but Herbert does a fairly good job of that. The problem lies more with what he lets his characters think. If it is clear from the conversation that one character is threatening another, I do NOT want to have to read the second character tinking “Oh, he’s threatening me.” This happens numerous times throughout the book – Herbert lets his characters spell out, in their minds, what the readerr can easily figure out themselves. Show, don’t tell is not a tip Frank Herbert took to mind.

For all the annoyance I felt because of the too-ambitious writing, I did enjoy this book a lot. I don’t think anybody can deny that it is deservedly named a classic. Even though I must admit, hadn’t I known that there were more books to come in the series, I would probably have been disappointed with the end. There is a nicely closed story arc but so many questions are left open and quite a few characters introduced that I just wanted to see more of.

THE GOOD: Incredible world-building, vivid characters, great story line. Picks up a lot of pace during the second half.
THE BAD: Slow beginning, at times confusing. Clunky, sometimes downright bad writing.
THE VERDICT: A must-read science fiction novel that will leave you wanting more. 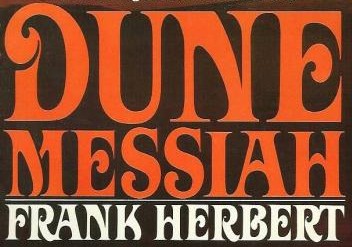 Erster Satz: Excerpts from the Death Cell Interview with Bronso of IX. Q: What led you to take your particular approach to a history of Muad’dib?