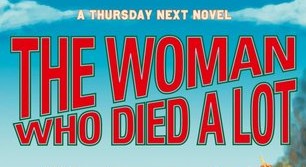 I’ve been a Fforde fan since the first book in his Thursday Next series. Reading these books is like coming home to a fun, crazy, upside-down universe peopled by all my favorite literary characters and then some. While I hold the first four books (and their bigger story arc) dearest, I think it’s brilliant how Jasper keeps coming up with new things and make them as quirky and whimsical as ever.

ALSO: HUGE, MASSIVE, GIGANTIC SPOILERS AHEAD FOR ALL THE PREVIOUS BOOKS IN THE SERIES 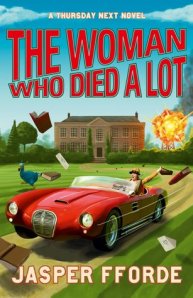 THE WOMAN WHO DIED A LOT
by Jasper Fforde

first sentence: The Special Operations Network was formed in 1928 to handle policing duties considered too specialised to be tackled by the regular force.

The BookWorld’s leading enforcement officer Thursday Next is four months into an enforced semi-retirement following an assassination attempt. She returns home to Swindon for what you’d expect to be a time of recuperation. If only life were that simple. Thursday is faced with an array of family problems – son Friday’s lack of focus since his career in the ChronoGuard was relegated to a might-have-been, daughter Tuesday’s difficulty perfecting the Anti-Smote shield needed to thwart an angry Deity’s promise to wipe Swindon off the face of the earth, and Jenny, who doesn’t exist. And that’s not all. With Goliath attempting to replace Thursday at every opportunity with synthetic Thursdays, the prediction that Friday’s Destiny-Aware colleagues will die in mysterious circumstances, and a looming meteorite that could destroy all human life on earth, Thursday’s retirement is going to be anything but easy.

Thursday Next is back!

From the very first clipping of fake non-fiction from Thursday’s world, we’re back in this place of madness, time travel, plocking dodoes and literary detectives. Jasper Fforde’s writing is always on point and his humor reminds me a lot of Douglas Adams – but with a voice still his own. This book is utterly readable for its quippy language, its clever jokes and Jasper’s numerous ideas. Fforde’s books – be they in the Thursday Next series or the Nursery Crimes – are richly imaginative and filled to the brim with mad ideas. So far, juggling multiple story lines and subplots has been a piece of cake for Japser and usually, the reader got to focus on one main story with the sub-plots being little bonus stories on the side. This time, the author threw a little too much at once at his readers.

In the beginning, the pacing is all over the place. Fforde starts us off with all of his plot threads, introducing us very shortly to each of them (and some sub-plots) and doesn’t really give us much time to reacquaint ourselves with characters that have been minor so far but became more important later in the series. Or to wrap our head around each story line. The start of this novel feels rushed at the same time as drawn out. Sounds weird, I know. But since I coulnd’t really immerse myself in any plot thread, I only started really liking it towards the middle. This is when each thread gets a little more time and depth and we get clues (and some really awesome twists) about what’s going on and how desaster might be avoided. By half the novel, I was completely invested again and wouldn’t put the book down for anything.

I have to say though, and I’m an attentive and avid reader of Fforde’s work, the announced Smiting of the GSD and the very probable impact of a meteorite got mixed up in my brain a lot. Tuesday Next is building an anti smiting shield and I had to remind myself that this was for the Standard Deity’s smiting, not the meteorite. This also came around towards the end because the Smiting of down-town Swindon by the Standard Deity needs to be averted too, and of course our Thursday has a hand in it.

There were things I didn’t like. Fforde took out two of my favorite things about this universe – the BookWorld and time travel. Sure, his reasons are fun (in a silly way) and he does manage to make the story compelling in the end, but I miss the Thursday whose father would pop up out of nowhere from whenever in time. The Thursday who’d meet with the rest of Jurisficion in Norland Park and be there for Heathcliff’s crowning moments as most tragic romantic hero. While both the BookWorld and time travel are still mentioned, I missed actually following Thursday into literature. With the Zone (reminded me a lot of the Strugatsky brothers’ Roadside Picnic which I’ve just recently read), Fforde won my heart back, though. Not only was the idea of a zone full of messed-up time hilarious, but the execution (and the very neat illustration) made it probably my second favorite chapter in the whole book.

My faovrite chapter, and favorite sub-plot, was the story of Thursday’s second daughter Jenny. Aornis Hades (remember that bitch?) implanted Thursday with a Mindworm, thinking and remembering a daughter that never existed. Whenever she’s reminded of the Mindworm, she realises it’s only Aornis, manipulating her memory. Unfortunately, these moments of lucidity only last for a little while until the Mindworm wins back over. Now that is a fascinating idea and I particularly enjoyed how Jasper Fforde decided to resolve it.

What’s truly missing though is the one thing that made the other Thursday Next books perfect instead of just great. The references,

hints and journeys into literature. Sure, there is one chapter on Enid Blyton fundamentalists that made me chuckle but Thursday’s world used to be defined by literature. Reading and books and Will-Speak-Machines used to be on every page. Except for being a librarian and occasionally holding a book, Thursday is now living in a mushed up science fiction rather than a meta fiction universe. This doesn’t diminish Jasper’s writing in any way, it just disappointed me and made me think nostalgically of the therapy sessions the cast of Wuthering Heights went through or the Cheshire Cat and inimitable Miss Havisham. None of that here, so this is only just a very good book instead of a great one.

The individual endings to the other plot lines also fell a bit flat for me. Some were surprisingly anti-climactic and one (the Smiting) was really stupid.

Like any Jasper Fforde novel, this is well worth the read and while I get the feeling that he’s trying a little too hard to reinvent himself with every new book (since First Among Sequels), he still counts among my favorite authors. The set-up for the next novel in the series also promises more interesting and insane ideas to come.

THE GOOD: Funny, full of ideas, wonderful characters, great dialogue and, come on, we have our Thursday back.
THE BAD: Flat ending, a little confusing and badly-paced at the beginning.
THE VERDICT: If you’ve read this far in the series, you do NOT want to miss it. While different than the other TN books, Jasper still delivers his usual quality.

The Thursday Next Series: 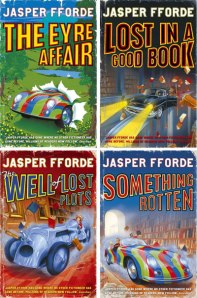