Another Dark Horse graphic novel finds me, yet again, pleasantly surprised and wanting more of the same, please. 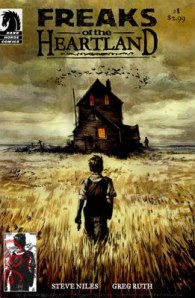 FREAKS OF THE HEARTLAND
by Steve Niles and Greg Ruth

Trevor’s monstrous little brother lives in the barn behind the house. The boy’s only six years old, but he towers over his older brother, and possesses incredible strength. For years, Trevor has looked after his baby brother, keeping him from the light, but now that’s all about to change. His family’s secret is about to be revealed, uncovering the horrible truth of the small Midwestern town the boys have grown up in.

A dark story told in dark, haunting pictures. I picked this up because of the stunning cover art. Those bleak midwestern fields with that one house set up against a grey background looked like it might be just my cup of tea. Trevor is just a kid who wants to play outside and live his life in peace. With a father like his, however, that’s not always easy. Severe and menacing, the father controls his wife and son and wishes his second son Will were dead. Trevor seems to be the only one caring for Will, the deformed giant of a six-year-old.

When things threaten to get out of hand, Trevor decides to run away with Will. But there is something the large boy still needs to do…

Every time I read a good graphic novel I am impressed by the way simple pictures and very little writing can make me care for a character. But Trevor as well as Will were immediately dear to me. Will may be huge and incredibly strong but he’s never seen the world outside his barn and to me he felt like a small child who needs to be loved and wants to explore the world around him. Trevor is a caring boy who had to grow up way too fast and take things into his own hands.

The plot is solid. A creepy midwestern town full of the expected hateful villagers who are scared more by the unknown than by anything else. If there’s conflict, get your guns (America). As unlikable as the adults in this story were, their actions were believable and drove the plot forward. I would have loved to see a little more of the “freaks” interactions and maybe a slightly less abrupt ending, but overall I really enjoyed this story.

Greg Ruth’s art is perfect for a tale such as this. His sketchy lines and the bleak color palette bring this town to life. There aren’t any bright colors and it becomes clear from the story that this is also the case in Will and Trevor’s lives. Everything seems tinted with grey. Now I’m a fan of strong colors but with a story like this, the choice was perfect. It evoked that haunted, darkly sinister image that goes so well with a tale about the blackest pits of human hearts. Dark Horse Comics are slowly becoming a favorite of mine (and I still haven’t read any of the Serenity comics)

THE GOOD: Creepy, dark pictures telling an even darker tale. Surprisingly vivid protagonists.
THE BAD: Somewhat quick ending, could have had more coverage on the more interesting characters.
THE VERDICT: Very enjoyable read if you want a quick, sinister story about the small-mindedness of midwestern villagers and how children are often the better people.

I don’t know about you, but I’ll be definitely checking out the Dark Horse Motion Comics on Felicia Day’s Geek & Sundry channel on Youtube.