This is not a review of the comic book series, or at least not all of it, because I haven’t finished reading it yet. As I write this, the very last few issues are being published, ending the series with #150. My final opinion will depend very much on stories yet to come, but because I am so in love with what I have read so far, I wanted to share with you just a few reasons to pick up Fables. 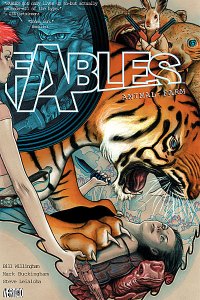 What’s this all about?

In the same vein as best-selling “fractured-fairy-tales” such as Wicked and Confessions of an Ugly Stepsister is Bill Willingham’s runaway hit graphic novel series FABLES. No longer just children’s tales, Willingham has created a new world for these beloved fables…one that exists within our own.When a savage creature known only as the Adversary conquered the fabled lands of legends and fairy tales, all of the infamous inhabitants of folklore were forced into exile. Disguised among the normal citizens of modern-day New York, these magical characters created their own secret society-within an exclusive luxury apartment building on Manhattan’s Upper West Side-called Fabletown. But when Snow White’s party-girl sister, Rose Red, is apparently murdered, it is up to Bigby, Fabletown’s sheriff, and a reformed and pardoned Big Bad Wolf, to determine if the culprit is Bluebeard, Rose’s ex-lover and notorious wife killer, or Jack, her current live-in boyfriend and former beanstalk-climber.

Where do I start?

That was the first question I asked myself when faced with a ton of comic books, different formats, spin-off and crossover series, computer games, and even more stuff. The biggest help I found on the internet was this post by The Written Word, titled So You Want to Read Fables. The beginning is pretty straight forward but keep an eye on the issue you’re reading. At a certain point, you’ll have to jump into the Jack of Fables spin-off in order to avoid spoilers . Most recently, I read about a crossover episode between Fables and The Unwritten. As I’m not nearly far enough ahead in the series to have reached that particular issue, I’ll worry about that when I get to it. 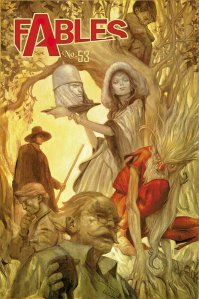 The next big question is: Do you buy the trade paperbacks or the (super shiny) deluxe editions? Because I like pretty books with pretty covers, I went for the deluxe hardcovers. Let me tell you, they are gorgeous! There are some differences compared to the trade paperbacks, such as little flashback stories, prose stories, or even  1001 Nights of Snowfall, the Arabian Nights of Fables. These are all contained in the deluxe editions at points in the story that Bill Willingham thought suitable. If you buy the paperbacks, some of these will have to be bought separately. Wikipedia has a list of which physical book contains which issues so you can make a nice comparison between the paperbacks and the hardcovers and see what works best for you. As far as my own experience goes, either way of reading them is fine. But it does make a difference whether you hold a big, sturdy hardcover in your hands, with glossy paper, high quality printing and just all around prettiness. If you’re not the kind of person who re-reads comic books or you don’t want to spend that much money, the paperbacks are probably the better choice.

Is it worth it?

Hell yes! The first story arc (and the first half of the deluxe edition #1) called Legends in Exile, didn’t strike me right away as something I needed to read. But once all the characters are introduced in their urban setting, I fell into it. Once I got to know the Fables that can’t be integrated into mundy (read: muggle) society in Animal Farm, I got more and more intrigued. Seeing that not all is well in Fabletown society makes things way more interesting than just following a bunch of characters hiding who they really are.

My love for Sheriff Bigby Wolf knows no bounds, the tension between him and Snow White alone makes this worthwile. Plus, I started really digging the drawing style. It’s not all beautiful or brightly colored but it’s just perfect for the stories it’s telling. The covers, on the other hand, are always stunning!

But what really made me go out and buy all the Fables that are currently available in hardcover (plus the entire Jack of Fables spin-off series) was the way seemingly unimportant side characters show unexpected depth in random places. Boy Blue, for example, was a likable guy who is always around, but only when I read The Last Castle did I truly appreciate him as a character. The same goes for Flycatcher – the Fables version of the Frog Prince. Boy, did those two rip my heart out!

Also interesting is the passing of time. While some issues follow up on what has happened before, others jump ahead a year or two in time. The flashbacks and POV switches add another layer of depth to the world. Whereas most of the plot happens in New York, the Fables chosen exile after the Adversary took over their Homelands, we do get glimpses of these fairy tale realms that used to be the characters’ home. Things that seem simple at first turn out to be much more complex and complicated after a while. 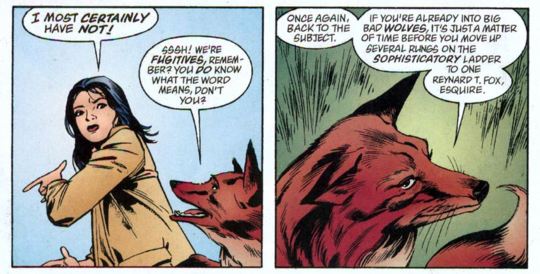 Fables contains a world that is bigger than the sum of its parts. I may have come in for the fairy-tales-living-among-us-mundies but I stayed for the people I’ve grown to know and love. Once you know Jack, you’ll laugh at his idiotic schemes. When it becomes clear just how in love Bigby is with Snow, you’ll yearn for the two of them to work out their issues. You’ll rejoice when Rose Red finally finds her place in the world, and you’ll laugh at Flycatcher with tears in your eyes.

My love for Fables took a while to grow but now it is steady and strong and here to stay.

There’s other Fables stuff out there?

I’m only a Fables baby but thanks to the Steam Summer Sale, I went ahead and bought myself The Wolf Among Us, a prequel to the entire comic book series (no prior knowledge needed, no spoilers for the comic books) and have played it a few times since. I will be gushing about that game in a separate post within the next few days. But let it be said here that it is absolutely worth its price.

Apart from the crossover with The Unwritten (which is on my wishlist now), the women of Fables got their own spin-off series, called Fairest. It’s still ongoing and seeing as Lauren Beukes wrote for it, there is no question I will buy and eat it up.

Some other much shorter spin-offs include Cinderella: From Fabletown, With Love and Cinderella: Fables are Forever as well as Werewolves of the Heartland, a  graphic novel following – unsurprisingly – Bigby Wolf. 2009 also saw the publication of the first illustrated Fables prose novel, called Peter and Max. One look at the cover gives you a clue as to whose story it tells.  1001 Nights of Snowfall is contained in the deluxe editions but not in the paperbacks. It’s not vital to the overall story but trust me when I say you don’t want to miss it.

If all of that spinning off and prequelling turns your head, there’s a handy Fables Encyclopedia.