Confession time: I had to leave this book off my Hugo ballot because I couldn’t finish it before the voting deadline. But the majority of voters have spoken and Cixin Liu is now the first Chinese author to win a Hugo. I loved translator Ken Liu’s acceptance of the award, although my favorite was (and still is) Sarah Monette/Katherine Addison’s Goblin Emperor. After finally reading the book, I am quite okay with it taking home the Hugo, however. 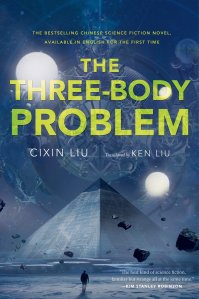 THE THREE-BODY PROBLEM
by Cixin Liu
translated by Ken Liu

First sentence: The Red Union had been attacking the headquarters of the April Twenty-eighth Brigade for two days.

The Three-Body Problem is the first chance for English-speaking readers to experience this multiple award winning phenomenon from China’s most beloved science fiction author, Liu Cixin.
Set against the backdrop of China’s Cultural Revolution, a secret military project sends signals into space to establish contact with aliens. An alien civilization on the brink of destruction captures the signal and plans to invade Earth. Meanwhile, on Earth, different camps start forming, planning to either welcome the superior beings and help them take over a world seen as corrupt, or to fight against the invasion. The result is a science fiction masterpiece of enormous scope and vision.

This is a book of ideas. Many reviewers I follow and trust have talked about the lack of character development and I can only echo those thoughts. I had several problems with this book but at the same time am really intrigued by its ideas and the story it sets up.

We mainly follow two character’s stories. Ye Wenjie lived through the Cultural Revolution, lost her father because of it, and ended up working on a military project. That’s the bit the blurb tells us in advance. The other main character is Wang Miao, who kind of slides into this whole thing sideways. His story was the one I followed with much more interest because the learning curve it required is not quite as steep. He starts seeing a strange countdown on all photographs he takes, but the countdown does not appear on pictures his wife takes, albeit with the same camera, only seconds after Wang used it. That’s a great setup for a horror novel, if you ask me.

So Wang, a scientist developing awesome nanomaterial, ends up playing a game called Three Body in which the player gets thrown into a wasteland. Here, the people suffer from the erratic behavior of the sun. Sometimes, it rises really quickly and super close to the planet, sometimes it doesn’t rise for years and years. The objective of the game is to figure out why and how to help the computer people survive in this crazy environment. This was also a part I enjoyed quite a bit – and the further Wang got on in the game, the more grateful I was for Ken Liu’s translator’s notes. They do help when you don’t have a science degree.

The ideas Cixin Liu presents are truly breathtaking. He builds up this novel to present a dilemma that can’t easily be solved. Since all the stuff about folding and unfolding matter into more (or fewer) dimensions went completely over my head, I tried to focus on what I usually like best about books – the characters. Here’s the problem: All of them are cardboard. The only person with the slightest hint of personality is Da Shi, and his character shines only through dialogue. Of which there is quite a lot.

I appreciate that most legthy explanations were packed into dialogue but this would have been such a good place to insert character development. Show me how these people differ from each other, not only by what they say but by how they say it. Liu didn’t do that, and this lack of believable characters to hold on to distanced me from the story emotionally. There is quite a lot at stake by the end of the book and, were it filled with characters I cared about, I would be on the edge of my seat. Hell, I’d be reading the second book already. And don’t tell me that a “hard” sci-fi novel can’t also have good characters, in addition to great scientific ideas or real-world science used in interesting ways. I just don’t see how one exludes the other.

It wasn’t just the characters that troubled me. The pacing felt erratic most of the time, the writing style was strange… while I couldn’t put the book down for a long time, there were parts in the second half that just bored me. You’d get characters coming up with a groundbreaking idea on How To Solve This Immediate Problem and they would explain it in detail – all this happens in dialogue with some other character. Then there is a cut to the next scene, where everything has been set up and is ready to go, much like you’d see in a movie. In fact, maybe that’s my problem. This text, the way it is written, would be much more suitable as a movie rather than a novel. I felt it didn’t really use its medium, it didn’t play with language (although whether that’s due to the translation or not, I can’t tell), it didn’t even feel the need to present sympathetic characters.

So I had gripes. Numerous gripes. But despite all of them, I was so thrilled to read about these crazy ideas, about humans trying to make contact with an alien species, about the mechanics of the game Three Body, and the Three-Body Problem itself, so I understand why so many people loved this book. And I can’t say, just because it’s not my cup of tea, that this isn’t a very good book. Depending on what you expect from your science fiction, this might be the best thing you’ve ever read. I’ve always been about characters first, and considering that Liu failed me on that count, I still got a huge amount of fun out of it. I’m certainly not going to run out at start reading The Dark Forsest right away, but I will read it eventually. If only to find out what happens next and whether Cixin Liu can break my brain two times in a row (I suspect he can and will).