I discovered the fairy tale East of the Sun and West of the Moon very late. Growing up on fairy tales, I knew most Grimms’ tales by heart, but somehow this norse version of Beauty and the Beast didn’t enter my life until I was well into my twenties. Despite knowing and loving Beauty and the Beast, I fell in love with this hard. Trolls, travelling on the four winds, a girl going on a journey to save her prince? Sign me up! 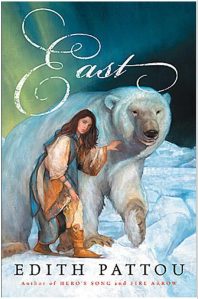 First sentence: I found the box in the attic of an old farmhouse in Norway.

Rose has always felt out of place in her family, a wanderer in a bunch of homebodies. So when an enormous white bear mysteriously shows up and asks her to come away with him–in exchange for health and prosperity for her ailing family–she readily agrees. The bear takes Rose to a distant castle, where each night she is confronted with a mystery. In solving that mystery, she loses her heart, discovers her purpose, and realizes her travels have only just begun.
As familiar and moving as “Beauty and the Beast” and yet as fresh and original as only the best fantasy can be, East is a novel retelling of the classic tale “East of the Sun, West of the Moon,” a sweeping romantic epic in the tradition of Robin McKinley and Gail Carson Levine.

There are three things that can make or break a retelling of East of the Sun and West of the Moon: the build-up, meaning the story before the bear shows up to take the youngest daughter away. Secondly, the relationship between the bear and the girl, how they are friends, whether they talk, how they spend their days and if they have a chance to grow fond of each other. And the third thing is the journey. The epic journey the girl undertakes, including all four winds, to reach the troll castle and save her prince.

Edith Pattou got two-and-a-half out of three, which is pretty good if you ask me. The set-up for this story is beautiful. Rose’s family is introduced as a family, not merely an extension of her as a protagonist. The chapters are narrated alternately from Rose’s point of view, her brother Neddy’s, the white bear, and even the troll queen. This gives Rose’s family some backstory and makes us understand how scared they are for their daughter/sister when she goes away with a huge white bear.

Rose’s mother lives by superstition. The new title of this book is North Child and it becomes clear early on why it was changed. Rose was born facing North, but since this is a bad omen, her mother has been pretending she is an East Child her entire life. But crazy as these superstitions sound, there must be a grain of truth to them, because Rose is wild and adventurous, curious and can’t sit still – just like a true child of the North. The groundwork that Rose’s mother lays for the novel’s internal mythology is just wonderful. I grinned and shook my head at the same time, but couldn’t help but love Rose’s mother for all her faults.

Rose and the bear were rather disappointing at first. It is a difficult act to write about a young girl who is visited nightly by a stranger who sleeps in her bed, and in books for children I always expect this part to be rushed. Rose’s time at the bear’s castle doesn’t pass quickly and I appreciated that the passage of time was written so well. But there is no relationship between the two. In fact, the only friendship of a kind Rose builds during her stay, is with one of the servants. Her and the bear – no chemistry, no bonding, nothing…

But the journey! Oh, the journey was wonderful. Rose goes through some serious hardships and while they are very different from the fairy tale, I think the changes make for a better story. She meets new characters along the way, one of which is Thor (not the god, just a sea captain) whose gruffness makes him all the more lovable. She spends some time with Inuit people (and on a side note, I was delighted to read about the bola, which I know from a video game called “Never Alone” which you should totally check out because it’s beautiful and atmospheric and you have an arctic fox as your companion, okay I’ll shut up now) and travels with Malmo who teaches her how to survive in the ice and snow. And the best thing is – Rose has to get over a language barrier with pretty much every other person she meets. Because Edith Pattou rocks and knows that not everyone in the world speaks the same language! Yay!

Again, once at the Troll palace, Rose doesn’t have it easy and it takes a long time for her to learn enough of the language and culture to work her way up into a position of relative power. During all these times, we keep getting glimpses into the White Bear’s mind, as well as Rose’s brother Neddy’s – and that not only makes for some refreshing change, it also demonstrates the family bond between Rose and her brother, and the strange feeling of being lost that the White Bear experiences.

The happy ending, if you haven’t guessed it yet, doesn’t come easy. There may be some slower passages while Rose is at the bear’s castle, but I loved (!) that this book actually conveys the hardships this young girl goes through. And the best thing: no insta-love. Her various traveling companions were all just as wonderful as brave, resourceful Rose herself. I immediately fell for scruffy Captain Thor, and I loved Rose’s bond with Sofi and Estelle, and especially Malmo. This was a wonderful version of the beloved fairy tale and I hope to read many more retellings that take so much care and incorporate so many new ideas while staying true to the original.