The Vandermeers (Jeff and Ann) are a name that everybody in SF knows. So far, I’ve only come in contact with the anthologies they edited. There are many of those and all of them fantastic. Assuming that someone who chooses other writers’ stories so well, must be at least a decent writer himself, I bought a couple of Jeff Vandermeer’s books. However, it wasn’t until now that I finally picked one up. The reason: I am shallow and totally love the covers for the Southern Reach trilogy. There you have it. 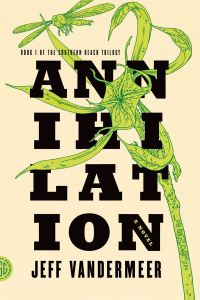 First sentence: The tower, which was not supposed to be there, plunges into the earth in a place just before the black pine forest begins to give way to swamp and then the reeds and wind-gnarled trees of the marsh flats.

Area X has been cut off from the rest of the continent for decades. Nature has reclaimed the last vestiges of human civilization. The first expedition returned with reports of a pristine, Edenic landscape; all the members of the second expedition committed suicide; the third expedition died in a hail of gunfire as its members turned on one another; the members of the eleventh expedition returned as shadows of their former selves, and within months of their return, all had died of aggressive cancer.
This is the twelfth expedition.
Their group is made up of four women: an anthropologist; a surveyor; a psychologist, the de facto leader; and our narrator, a biologist. Their mission is to map the terrain and collect specimens; to record all their observations, scientific and otherwise, of their surroundings and of one another; and, above all, to avoid being contaminated by Area X itself.
They arrive expecting the unexpected, and Area X delivers—they discover a massive topographic anomaly and life forms that surpass understanding—but it’s the surprises that came across the border with them, and the secrets the expedition members are keeping from one another, that change everything.

A biologist, an anthropologist, a psychologist, and a surveyor make up expedition 12 into Area X. What sounds like the beginning of an elaborate joke is really a wonderfully creepy story with riddles upon riddles. If you like your stories resolved and your questions fully answered, then this is probably not for you. This is a book for people who enjoy not knowing or at least not knowing all they’d like to know to understand the puzzle. Area X is just there, we don’t know why or since when. We aren’t told what the expeditions are for – but the professions of the group members lead me to believe that the reasons are scientific in nature. Study this strange place and the creatures that inhabit it.

None of the four protagonists are ever named, they are simply known by their profession, which lends the already eerie narration another layer of distance. The first person narrator, the biologist, gives little personal information but manages to paint a picture of the surroundings without turning to clunky language. With the discovery of a “tower” that leads down into the earth rather than up at into the sky, the group start examining strange writing on the wall that seems to be composed of living matter. With this begins a journey into Area X as well as into the psyche of the biologist – who I’m sure is one of the more brilliant unreliable narrators out there. This would be a very different book, had it been told by any of the other expedition members.

Area X may be the real star of this book but its characters do come to life slowly. Despite narrating, the biologist’s personality is a mystery for the most time. It becomes clearer and clearer with little flashbacks into her childhood and her obsession with an uncared-for swimming pool-turned-frog-paradise. But it is the handful of memories of her husband and the time before the expedition that show different aspects of her and make her feel like a real, vivid person. I’d hazard anyone can relate to being passionate about something. I’m passionate about books, the biologist is and always has been passionate about life and how it works. She spent hours watching the frogs and fish and dragonflies living in and around her swimming pool as a child, I spent all my pocket money on fantasy books. It’s easy to identify with her in that respect, even though our passions may be widely different.
But showing aspects of her personality that don’t make her likable is the real sign of a three-dimensional character. The biologist is highly introvert and the crass opposite of her sociable husband. The way she thinks about him in general distanced her from me again. I could never think about my husband as clinically and scientifically as she does – passion is something she only has for her work.

The other characters get varying degrees of the same treatment, but this being a first person narrative, part of the enjoyment of this book is that, most of the time, we just don’t know who these people really are. The psychologist obviously exerts some power over the others – the group entered Area X under her hypnosis – and in a potentially hostile environment, being with a person like that would make me more than a little bit queasy.

The idea and plot reminded me, at first, very much of the Strugatsky brothers’ Roadside Picnic, which starts on a similar premise. An area once visited by aliens that now holds all sorts of shenanigans, messing with physics and time, enough to give you nightmares. Area X isn’t exactly the same and neither is the plot. But if you like the one, you’ll probably like the other. But what makes Area X so intriguing is that we are left in the dark about pretty much all of it. How did it come to be? Was there a natural disaster? A human-made one? Did aliens come visit and leave their space junk and/or extraterrestrial fauna? Why did the previous 11 expeditions all end the way they did? It’s a mystery within mysteries and, trust me, it is enormous fun trying to figure even one of the out.

That said, part of the fun is hoping for a nice payoff at the end. There were several moments that made me gasp and sent my brain into crazy-speculation-mode, but the big bang I was hoping for didn’t arrive. Then again, I have high hopes for the second and third novel in the trilogy to shed some light on all the weirdness and I’m quite alright spinning my own theories until they come out later this year.