I had planned to finally read a Shirley Jackson book for years, but every time I thought of it I wanted to save it for October. You know, for when I need Halloween reads. Then I ended up forgetting… but not this year! I finally picked this up and loved it so much that I won’t wait for October to read the next one. 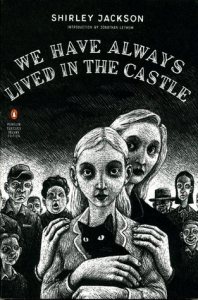 WE HAVE ALWAYS LIVED IN THE CASTLE
by Shirley Jackson

First sentence: My name is Mary Katherine Blackwood. I am eighteen years old, and I live with my sister Constance.

Merricat Blackwood lives on the family estate with her sister Constance and her uncle Julian. Not long ago there were seven Blackwoods—until a fatal dose of arsenic found its way into the sugar bowl one terrible night. Acquitted of the murders, Constance has returned home, where Merricat protects her from the curiousity and hostility of the villagers. Their days pass in happy isolation until cousin Charles appears. Only Merricat can see the danger, and she must act swiftly to keep Constance from his grasp.

Wow! Just wow. Let me tell you how this went down. I curled up on the couch and decided to try the first chapter of this little book here. I stayed up very, very late (despite having to get up early for work the next day) to read as far as I possibly could. In the very first chapter, Shirley Jackson builds up so much atmosphere, such an air of mystery and paranoia, that I couldn’t have put the book down. I just didn’t have the willpower.

Mary Katherine – called Merricat by her sister – goes on one of her two weekly trips to the town, to pick up groceries. Merricat, her older sister Constance, and their uncle Julian live in a big house a bit outside the city. The story is told by Merricat, which was a stroke of genius on the author’s part and makes the book all the more intriguing to read. Very little is known about the Blackwood family, only that most of them have died, and that the remaining sisters and uncle are shunned by the town people. Merricat follows strict rituals to get through her days. In fact, she almost seems to live in her own little dream world at times. She makes up games for her trips to town, she plans how to furnish her house on the moon where she wants to live with her sister…. she’s not a very trustworthy narrator, to say the least.

In the second chapter, the bomb drops. I realise the blurb already gives this away, but I had bought this book so many years ago that I had completely forgotten that. So the Blackwood family was murdered. Poisened with arsenic in the sugar bowl. During one fateful dinner, all the family members who had used the “sugar” started dying, leaving only Constance and Merricat, as well as uncle Julian, who has only eaten a little bit of “sugar” and survived, although he is now in a wheelchair and suffers from a befuddled memory.

The question that haunted me (until I figured it out, at least) was who really killed the Blackwoods and why. Constance was suspected – as she prepared the dinner – but eventually acquitted of the charge. Could it all have been an unfortunate accident? Merricat’s narration, as I mentioned, can not always be trusted. Sometimes, she goes off on tangents and focuses more on her own little games, such as burying objects in their garden or chanting words for protecting the house, so the reader can never be sure if she leaves important clues out, if she simply doesn’t remember, or if she is knowingly deceiving us. Either way, it makes for a super thrilling read!

Apart from the mystery, I was also impressed by the characterisation. On less than 250 pages, Shirley Jackson brought these two sisters to vibrant life. Their rituals, their conversations, it all makes perfect sense. They are fully-formed human beings who have been through a tragedy and, naturally, live lives very different from the other townspeople. I also sympathised with uncle Julian, whose main purpose is to chronicle the events of that fateful night, to get his memories in order, to find all the facts and solve the mystery.

I admit that the big twist was not all that difficult to guess, but at that point, it didn’t matter. When I figured out who killed the Blackwoods, I was already too deep in the story, I cared too much about the characters – plus, a new threat to their strange yet ordered lives appears early on in the book, and Merricat has to do everything in her power to protect her sister and their home.

For such a short book, there is a surprising amount of layers to uncover. I was amazed. Without being able to put my finger on a reason, the writing felt so fluid that there never seemed to be a good spot to put the book down. Even after my most burning question was answered, I still always needed to know what happens next. I found myself actually caring about Merricat’s weird buried objects and needed them to remain intact and in their place. The sense of paranoia, even madness, totally takes over and makes reading this almost like a dream. It doesn’t have to make sense to feel real and important.

So Shirley Jackson will now be my go-to author for October or any other time I feel like a creepy book with depth and great writing. I’ll say it again: Wow!

8 thoughts on “R.I.P. Review: Shirley Jackson – We Have Always Lived in the Castle”