I’m very cautious when it comes to hyped books because we’ve all stepped into the trap of expecting the world of a novel, only to end up disappointed that it doesn’t deliver what was promised. In the case of Raybearer I needn’t have worried. The hype machine worked pretty hard to promote this book but I am so happy to report that Ifueko’s debut novel not only does what it says but surpassed all my expectations. 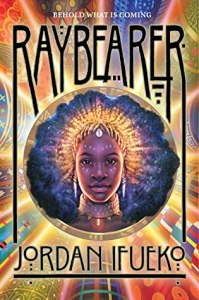 Opening line: I shouldn’t have been surprised that fairies exist.

Nothing is more important than loyalty.
But what if you’ve sworn to protect the one you were born to destroy?
Tarisai has always longed for the warmth of a family. She was raised in isolation by a mysterious, often absent mother known only as The Lady. The Lady sends her to the capital of the global empire of Aritsar to compete with other children to be chosen as one of the Crown Prince’s Council of 11. If she’s picked, she’ll be joined with the other Council members through the Ray, a bond deeper than blood. That closeness is irresistible to Tarisai, who has always wanted to belong somewhere. But The Lady has other ideas, including a magical wish that Tarisai is compelled to obey: Kill the Crown Prince once she gains his trust. Tarisai won’t stand by and become someone’s pawn—but is she strong enough to choose a different path for herself?

One of the gripes I have with many YA books that end up falling flat for me is that they only have one thing – one theme, one issue, on idea to set them apart – that is supposed to carry the whole story. Say, for example, the protagonist has a special power, and that’s all there is to make her interesting. Raybearer is the exact opposite of that, which is probably why I liked this book so much. There are so many ideas here and they all come together beautifully to create a fascinating world peopled with complex characters – what more can I want from YA, really?

Tarisai grows up in a magically hidden away house where she is mostly left alone by her mother, The Lady. She longs for family and love but the servants won’t even touch her because of her gift of reading and even taking away memories. This so-called Hallow is why The Lady sends Tarisai off to the capital in order to compete with other children to become one of the Crown Prince’s Council of Eleven. This Council is a group of eleven people, each with a Hallow, who are connected to the Prince and to each other via the Ray – a magical bond closer than blood. If they are too far from each other, they feel pain; they can telepathically communicate, they can share their thoughts and feelings and each Council member also provides a unique magical protection for the Prince. Once the Council is fully anointed, the Prince cannot be killed by anyone except a member of that council.
There are so many great ideas in that premise alone that it would have been enough for a great story, but Jordan Ifueko doesn’t stop there. The world of Aritsar has even more to offer, both in terms of politics, lore, songs, and history, that there is always something new to discover.

What really makes this book shine, though, are the characters. Tarisai is a great protagonist, not because she is flawless by any means, but because she is made of conflicts. The Lady compelled her to become a Council member and to kill the Prince. But Tarisai actually grows to love Prince Dayo like a brother and wants to do everything in her power to protect him. Instead of just bemoaning her fate, though, she puts her brain to it and searches for ways around her curse. Her cleverness, her kindness, her love for Dayo and their friends are what made Tarisai so lovable.
Many YA books also tend to use character development solely only on the protagonist and leave the side characters almost blank. Maybe they get one character trait each, but that’s it. In Raybearer, we don’t get to know every single member of the Council very well but instead focus on a select few who are shown to be layered, believable people with dreams and feelings of their own. I thought this was a great decision on the author’s (or editor’s?) part. Tarisai’s best friend Kirah felt like a real person and the girls’ friendship was simply beautiful. Even more beautiful was Tarisai’s relationship to Sanjeet and how their bond slowly grows over time. Every time these two had an interaction, it warmed my heart!

But wait, this book isn’t done yet! There is also a plot and it packs a punch. Do you know those books that start out as one thing and then slowly peel away layers and layers to reveal that the world is so much bigger than you thought, that there are mysteries within mysteries? Yeah, I love that kind of book, and Raybearer absolutely delivered on that part. I thought I was going to read about a girl destined to kill a boy she loved and how she fights against that compulsion. And while I did get to read about that, there was so much more. We learn about different cultures and traditions, about how the magic in this world works and what the implications are, about Raybearers past and present, and about why The Lady kept Tarisai hidden away for so long only to send her on a cruel mission. There’s inequality in the world that needs fixing, there are secrets that want to be revealed, friendships that want to be saved, and in the middle of it all a young girl yearning for a family, for a place to belong.

I think the first moment when I realized this wouldn’t just be a good book but a great one was when Tarisai takes a certain action at about a third into the book. This action – I’m being vague for fear of spoilers – could just as easily have been the resolution to the whole story, had this been a simpler, less well thought-out YA book. The fact that she did what she did so early on in the story made me realize that Jordan Ifueko has a lot more to tell and doesn’t have to hold back her ideas. And then she does the same thing again, later in the book. I thought I knew what kind of quest I was on with Tarisai, Sanjeet, Kirah, and Dayo, but it turns out, things go even deeper than that. We get to see different parts of the Kingdom, meet other cultures, learn about the land’s history, and watch Tarisai grow up through all of it.

In case you haven’t guessed it yet, I have endless amounts of love for this book! Because the last thing that could have ruined it is the writing, and the writing happened to be fantastic. There is nothing particularly flowery about the language, but I adored how Ifueko added songs and drum sounds into the story. What sealed it for me was the way she described her characters interacting. It could have been so easy to turn Dayo into Tarisai’s love interest (the destined to kill the one you love trope is a trope for a reason, after all), but instead, the two are just incredibly close friends and – at least for me – that bond felt even closer than a romatic relationship could have. Whether it’s Tarisai and Sanjeet or Tarisai and Kirah, or even Tarisai and one of the tutors teaching the new Council, the author always managed to not just convey information thorugh her writing but to also add an emotional layer. No conversation is simply an exchange of words.

As for the ending… well, that was something else! Not only do a LOT of things happen, but the ending also somehow manages to satisfyingly finish the main arc of the story while setting up the story for the sequel. And, boy, what a setup it is!

I listened to this on audio, so I have to mention the narrator (and actress) Joniece Abbott-Pratt. What a great job she has done of bringing Ifueko’s brilliant characters to life. I was especially impressed with how she showed the characters at different ages while still keeping them distinct from each other. She also actually sang the songs in this book which added a lot of atmosphere. I’m still a bit annoyed that I couldn’t access my NetGalley copy of the audiobook, but in retrospect, I don’t begrudge the book (or the author, or the narrator) the Audible credit it cost me to buy my own copy. And this way, I can re-listen to the book when the sequel comes out.